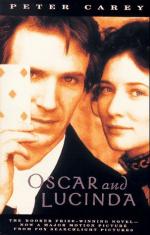 Peter Carey
This Study Guide consists of approximately 91 pages of chapter summaries, quotes, character analysis, themes, and more - everything you need to sharpen your knowledge of Oscar and Lucinda.

This detailed literature summary also contains Topics for Discussion and a Free Quiz on Oscar and Lucinda by Peter Carey.

Oscar and Lucinda is a satire about two star-crossed lovers that takes place in the mid-nineteenth century. Oscar Hopkins is a contradictory man, both pious and corrupt. He was raised by a strict, religious father, but he abandons his father's religion in favor of Anglicanism. He spends the rest of his life wondering if his decision has damned his soul to hell, as his father believes. Oscar further endangers his soul when he takes up gambling while in divinity school. Oscar justifies his vice by philosophizing that believing in God is a gamble anyway. How could God condemn a man for having a bit of fun at the racetrack? Locked in an inner conflict between his fears of damnation and his need to gamble, Oscar decides that a little suffering might go a long way towards redeeming him in God's eyes. He decides to face his crippling fear of the water and sail to Sydney, where he intends to devote his life to dangerous missionary work in the wild badlands of Australia. On board the ship, he meets his counterpart and fellow compulsive gambler, Lucinda Leplastrier.

Lucinda is a feminist ahead of her time in the Victorian era. She is shunned by society for her independent views and refusal to wear dresses with corsets. The rich heiress owns a glassworks factory in Sydney, which her male employees will not let her enter without permission. Lucinda is returning to Sydney from a year-long sojourn in London, where she had hoped to find a husband. However, London society shuns her more cruelly than Sydney society. She returns home, where her weakness for gambling and cards destroys the reputations of the only two men who dare to befriend her, Oscar and Reverend Dennis Hasset, a fellow glass enthusiast. Hasset is sent up-river to a parish in the wilderness by the Bishop of Sydney as punishment for his friendship with Lucinda. Oscar is kicked out of the church entirely by the Bishop when the local press discovers his late night card games with Lucinda. Lucinda feels responsible for Oscar's downfall and takes him into her home. There, the two misfits eventually become friends, and he learns to share her love for glass. Their unmarried, though chaste, cohabitation causes an even bigger scandal in society, but they take refuge in their growing love for one another. Their lack of social skills prevents them from acknowledging that they are in love, but their shared love of glass and gambling spurs them to bet their entire fortunes on a venture to build a glass church. Oscar nobly agrees to deliver the church to Hasset's wilderness parish in an act of love for Lucinda, whom he imagines to be in love with Hasset. This adventure threatens to destroy both Oscar and Lucinda, and in the end, their glass house comes crashing down, but with a surprising twist.

More summaries and resources for teaching or studying Oscar and Lucinda.