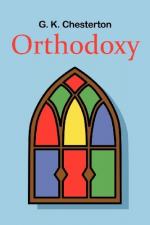 Plot Summary
+Chapters Summary and Analysis
Chapter I: Introduction in Defence of Everything Else
Chapter II: The Maniac
Chapter III: The Suicide of Thought
Chapter IV: The Ethics of Elfland
Chapter V: The Flag of the World
Chapter VI: The Paradoxes of Christianity
Chapter VII: The Eternal Revolution
Chapter VIII: The Romance of Orthodoxy
Chapter IX: Authority and the Adventurer
Free Quiz
Characters
Objects/Places
Themes
Style
Quotes
Topics for Discussion
Order our Orthodoxy Study Guide

G. K. Chesterton
This Study Guide consists of approximately 27 pages of chapter summaries, quotes, character analysis, themes, and more - everything you need to sharpen your knowledge of Orthodoxy.

This detailed literature summary also contains Topics for Discussion and a Free Quiz on Orthodoxy by G. K. Chesterton.

The Christian religion, specifically Catholicism, is a religion that not only is compatible with liberalism, but is itself thoroughly liberal. From its perspective, though, modern thought has to be thoroughly examined and the falsities within it have to be purged. The assumption of many modern thinkers, for example, is that imagination is something to be avoided, some going so far as to suggest that overindulgence in the imaginary can lead to insanity. Insanity, however, really is caused by relying too much on reason and leaving nothing mysterious. Attempting to explain everything with logic leaves the world small and the mind becomes incarcerated in it. One line of seemingly logical thought is skepticism, but if taken to its extreme, it spells the death of all thought. If one starts doubting everything, then one must doubt reason itself, and, if reason is doubtful, thought is useless.

Rather than resorting to the writings of the "great minds" of modern times, many useful lessons can be gathered from the fairy tales told to children. Fairy tales give two timely reminders to the world. First, by showing what an absurd world is like and how different things can be in them, they show the world that the way things are in it is not the result of some necessary, logical law, but rather the design of an intelligent creator. Second, they show that if something good is given to someone (like Cinderella's chance to go to the ball or the ability to fall in love) it is senseless to protest if there are rules restricting the gift (like the fact that Cinderella must leave before midnight or the rule that sex must only occur inside of marriage). These two lessons are taught also by Christianity. Further, the Christian who recognizes the world is created, adopts a unique attitude towards it: He loves it like a patriot loves his country, but he strives constantly also to fix it, because it is part of God's plan that he help it.

This fusion of two seemingly competing attitudes—the love of the world and the desire to change it (for the better)—is a pattern that is actually seen throughout Christianity. Unlike the ancient pagans, who set one passion against the other so that they canceled one another out, the Christian takes the opposite passions and embraces both. For example, when someone commits a sin, the Christian is faced with two reactions—outrage at the sin and love for the sinner—and he embraces both to their fullest extent.

"Progress" and "progressives" are more commonplace features of modern thought, and, once again, the Christian religion holds the true meaning to these terms. Unlike many modern thinkers, Christianity realizes that the term "progress" implies a vision—if one is progressing, one must be progressing towards something. Further, this progress is not something which happens automatically, but it must be worked for and, in fact, any hesitation in working for will inevitably result in sliding back and away from the vision.

While Christianity truly is a liberal religion, some so-called liberals attempt to false liberalize the religion and draw erroneous conclusions such as the position that Christianity and all of the other religions in the world, despite their superficial difference, are really the same. This false attempt at religious unity ignores the real doctrinal differences between, for example, Christianity and Buddhism. Christianity argues that happiness and enlightenment are to be found in God, who created man separate from Himself and therefore is external; whereas, Buddhists seek enlightenment internally. The last refuge for agnostics is to urge any number of factual arguments against Christianity, but these arguments are ultimately flawed and fail to pass the basic tests of history.

More summaries and resources for teaching or studying Orthodoxy.