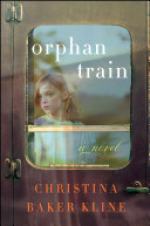 Related Topics
A Piece of the World: A Novel
The Exiles

Christina Baker Kline
This Study Guide consists of approximately 42 pages of chapter summaries, quotes, character analysis, themes, and more - everything you need to sharpen your knowledge of Orphan Train.

Orphan Train is a young adult / historical fiction novel about the relationship between seventeen year-old Molly Ayer and ninety-one year-old Vivian Daly who, as the result of spending time together and sharing their experiences, form a bond, learn from each other, and change in significant ways.

Molly is a troubled foster child in Maine who is about to “age out” of the system (that is, she's becoming too old for the system to continue accommodating). She was put into the system after her father died in a car accident and her mother turned to drugs. Molly, of Penobscot Indian descent, lives with spiteful Dina and timid Ralph, Dina keeping her around in order to keep receiving the government payments she receives for foster parenting. One day, Molly steals a book. As punishment, she is sentenced to perform fifty hours of community service. Molly's boyfriend Jack comes up with a plan for filling those hours: Jack's mother, Terry, is the housekeeper for elderly Vivian, who lives in a large and lonely house and whose attic needs cleaning. Seeing the situation as an opportunity for relatively light work, Molly agrees to clean out and organize the attic.

As the story of Molly's relationship with Vivian develops in the present day, its events are paralleled with / echoed by the story of Vivian's experiences in Depression-era Minnesota. That story begins with Vivian's Irish family coming to New York through Ellis Island. While struggling to make ends meet, a fire kills everyone else in the family, leaving Vivian an orphan. As a result, Vivian is sent on an “orphan train” in the hope that somewhere, she will find a family to take her in. While on the train with several other orphans in similar circumstances, she meets an older boy, Dutchy. They develop a friendship and promise to find each other in the future. Vivian is eventually placed with the cruel Mrs. Byrne, who runs a clothing shop where Vivian makes her way sewing clothes. This situation comes to an end with the stock market crash of 1929 in which Mrs. Byrne and her husband lose their wealth. Vivian is next placed with the poor, filthy, and despicable Grote family. Mrs. Grote is a shut-in who hardly gets out of bed, and Mr. Grote is a do-nothing. Vivian's time with the Grotes ends when Mr. Grote attempts to rape her. Mrs. Grote blames Vivian for the incident and kicks her out into the cold. Rescued by her teacher, Miss Larsen, Vivian is placed first with the kindly Mrs. Murphy, and finally with Mr. and Mrs. Nielsen, who own a general store and who allow Vivian to introduce several new innovations.

Several years later, Vivian has a chance reunion with Dutchy. Shortly after they fall in love and get married, Dutchy is drafted into World War II where he dies on the Pacific Front. Vivian has Dutchy's baby but is too emotionally devastated to care for it, so she gives it up for adoption, keeping the story and its accompanying shame secret throughout the subsequent decades of her life. Meanwhile, Vivian marries Dutchy's best friend from the army, Jim Daly, and makes a comfortable life for herself.

This narrative unfolds at the same time as the present day story develops, describing how Molly goes through some difficulties of her own, but at the same time develops a connection with Vivian that gives her support, refuge, and comfort. When she is kicked out of her foster home by the cruel Dina, Molly is taken in by Vivian, who eventually allows Molly to interview her as part of her work on an American history assignment for school. Molly also introduces Vivian to the Internet and encourages her to seek out her long-lost daughter. At the end of the novel, Vivian has an in-person encounter with that daughter, Sarah Dunnell, now sixty-nine and a musician, just like Dutchy. That encounter, the narrative suggests, would never have taken place if Vivian and Molly, initially wary of other people in general and of each other in particular, had not let down their defenses and been vulnerable with themselves and each other.

More summaries and resources for teaching or studying Orphan Train.