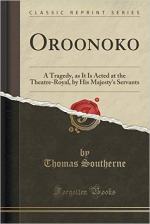 The play, "Oroonoko" is designed with two running plots that have very little connection. The first story introduced to the audience is that of the Welldon sisters, Charlotte and Lucy, who leave their home of London, England, and move to Surinam, West Indies, in search of husbands. Their husband-hunting has run dry in London and they move to the the English colony of Surinam for a fresh start. Since apparently women cannot purchase land in Surinam in 1695, Charlotte disguises herself as a man. This ruse leads to other dimensions, however, when a rich, old widow becomes smitten with Charlotte, who she thinks is a man. Having designs on the old woman's fortune, Charlotte plays along to a degree. When they "marry" Charlotte recruits a local, Jack Stanmore who has designs on the widow, to sneak in at night and have sex with the woman.

The major plot, and the more serious of the two, involves the tragedy of Oroonoko, an Angolan prince, who is betrayed and tricked into becoming a slave. Prior to becoming a slave, Oroonoko's father, the Angolan King, had already made Oroonoko's life unbearable. The King was so taken with Oroonoko's beautiful and alluring wife, Imoinda, that he could not bear to see her with anyone else. The King exiles Imoinda to Surinam as a slave. Due to her physical appeal, she is forced to become the mistress of Surinam's Governor.

Ironically, one of Oroonoko's responsibilities in Angola is to gather countrymen to sell for slaves. He often deals with the slave trader, Captain Driver. The Captain invites Oroonoko on the slave ship on the premise of touring the facilities on board the ship. The Captain gets Oroonoko drunk. Oroonoko passes out and when he comes to he is in chains and shackles and on his way to Surinam and sold as a slave.

The upside of this change of fortunes for Oroonoko is that he is reunited with Imoinda. They are ecstatic to find one another again even under such terrible circumstances. She is carrying his child and they contemplate a future together as a family. The slaves are planning a revolt against their owners in a fight for freedom. Oroonoko is convinced to join the movement and become its leader. When one of the slaves betrays Oroonoko and reveals their plans to the governor, their plans are sabotaged. The governor promises Oroonoko his freedom if he yields. However, the governor betrays Oroonoko who is seized when he surrenders his sword. The Governor who desires Imoinda forces her away from Oroonoko.

With Blanford's help, Imoinda is able to escape from the Governor. She finds Oroonoko who is standing by the dead body of his servant, Aboan, who committed suicide rather than return to life as a slave. Oroonoko and Imoinda come to the realization that the only way they can ever be together is to die. Imoinda commits suicide just before the Governor and his men find them. Oroonoko whispers to his dead wife that he will soon be with her. Oroonoko kills the Governor and then himself. The play ends with Blanford, Oroonoko's loyal friend, saying a prayer for the slave prince.