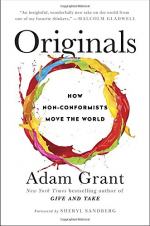 Adam Grant
This Study Guide consists of approximately 34 pages of chapter summaries, quotes, character analysis, themes, and more - everything you need to sharpen your knowledge of Originals.

The following version of this book was used to create this study guide: Grant, Adam. Originals: How Non-Conformists Move the World. Viking, 2016.

Everyone has ideas, but not everyone acts on those ideas, and even fewer manage to successfully implement their ideas in any sort of meaningful way. Author and psychologist Adam Grant calls those few who do “originals.” In his book, Originals: How Non-Conformists Move the World, Grant uses a combination of research and historic anecdote to explain what makes an idea successful, and what makes a person who can create successful ideas.

Originals comes off as a cross between an academic text and a self-help book. It is full of references to academic studies, but is addressed directly to the reader, and is full of Grant’s personal opinions and advice. “Originals” focuses on the social sciences, covering fields like economics, sociology and psychology, which study human interactions that can’t always be scientifically or experimentally controlled.

In Chapter 1, "Creative Destruction: The Risky Business of Going against the Grain," Grant talks about what he thinks makes a person an original. He talks about how early success within established systems versus being willing to chance the system. He describes a number of cases of people who were willing to take risks, but were also smart about which risks to take. He talks about how he sees being an original as a choice, not an innate quality or talent.

In Chapter 2, “Blind Inventors and One-Eyed Investors,” Grant talks about how people can recognize when someone else’s idea is worth taking the leap on, and how people know who will be a good source of feedback and support for their own ideas. Chapter 2 looks at how different types of experience can be helpful, and at how too much experience in one specific area can actually be a hindrance, leaving “experts” too stuck in their ways to recognize when something new will work and when something that seems familiar and safe may actually flop.

In Chapter 3, "Out on a Limb: Speaking Truth to Power," Grant examines different methods of making change within a system by comparing the cases of CIA analysist Carmen Medina and Apple executive Donna Dubinsky. Grant looks at four different responses to discouragement and when to use them. He talks about the general challenges originals face, as well as the specific types of discrimination these two women faced, and talks about the difference between power and status.

In Chapter 4, "Fools Rush in: Timing, Strategic Procrastination and the First-Mover Disadvantage," Grant talks about the difference between being first and being the best. He says that people often see the being first as the key to being successful, but that taking your time is what usually allows you to fix the problems that will most likely actually sink the first version on the market. He also talks about the upside to procrastination, and how people can use it to their advantage without letting it get out of control.

In Chapter 5, "Goldilocks and the Trojan Horse: Creating and Maintaining Coalitions," Grant looks at the partnerships necessary to keep the momentum behind a movement going. He discusses the small differences that can drive like-minded people apart, and talks about how to convince nay-sayers to join a cause. He also looks at the idea of “frenemies,” talking about how back-stabbing or under-cutting friends can actually be more detrimental than people who are consistently antagonistic, because at least you know where you stand around them.

In Chapter 6, "Rebel with a Cause: How Siblings, Parents and Mentors Nurture Originality," Grant looks at different ways in which upbringing and childhood experience affect adult success, paying careful attention to birth order. Grant says that younger children are raised as much by their older siblings as by their parents, in contrast to older children, who spent the first few years of their lives surrounded by adults. Grant says that this often results in younger children being more sheltered in some ways, and feeling like they have to measure up to their older siblings’ successes in others, often leading them to pick less conventional areas to try to find success in. He also says that regardless of upbringing, to be successful, people need strong role models in their specific field.

In Chapter 7, "Rethinking Groupthink: The Myths of Strong Cultures, Cults and Devil's Advocates," Grant looks at different types of work environments, and the pros and cons of different hiring styles. The overarching example is that of Bridgewater Investments, a unique company in which employees are not only allowed to do so, but required to challenge authority. Each sub-section of this chapter then looks at a different company with a different leadership style, and whether that style promotes or stifles change.

In Chapter 8, "Rocking the Boat and Keeping It Steady: Managing Anxiety, Apathy, Ambivalence and Anger," Grant examines how strong emotions can be used to fuel the way forward or impede progress. Grant talks about how to channel anger into action without letting it control you. He uses the example of revolutions in Serbia, Egypt and Chile to discuss the power of humor, look at when to use discontent and when to use optimism, and how knowing someone else is on your side helps overcome fear.

Grant finishes Originals with a list of tips that guide the reader on how to take the advice given in the book and turn it into action.

More summaries and resources for teaching or studying Originals.