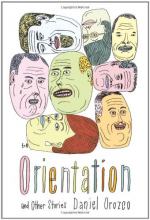 Daniel Orozco
This Study Guide consists of approximately 17 pages of chapter summaries, quotes, character analysis, themes, and more - everything you need to sharpen your knowledge of Orientation.

This detailed literature summary also contains Quotes and a Free Quiz on Orientation by Daniel Orozco.

The following version of this story was used to create this study guide: Orozco, Daniel. Orientation. Orientation: And Other Stories. Farrar, Straus and Giroux, 2012, p. 3 – 10.

The co-worker continues the tour of the office. The new employee learns about the healthcare policy and the kitchen etiquette. Next, the co-worker describes how Barry Hacker's wife died, and the co-worker explains that sometimes the employees notice the ghosts of Hacker's wife and unborn child.

More summaries and resources for teaching or studying Orientation.