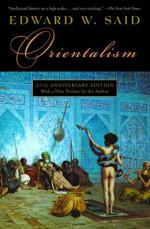 Edward Said
This Study Guide consists of approximately 41 pages of chapter summaries, quotes, character analysis, themes, and more - everything you need to sharpen your knowledge of Orientalism.

Orientalism by Edward W. Said is a critique of the study of the Orient and its ideology. Said examines the historical, cultural, and political views of the East that are held by the West, and examines how they developed and where they came from. He basically traces the various views and perceptions back to the colonial period of British and European domination in the Middle East. During this period, the United States was not yet a world power and didn't enter into anything in the East yet. The views and perceptions that came into being were basically the result of the British and French. The British had colonies in the East at this time; the French did not but were trying to acquire some.

The beginning of the study of Orientalism is traced to the early eighteenth century and focused on language. This early study consisted of translating works from the Oriental languages into European languages. The colonial rulers could not rule properly, it was believed, without some knowledge of the people they ruled. They thought they could acquire this knowledge from translating various works from the native language into their own. The Orient existed to be studied and that studying was done by Westerners who believed themselves to be superior to the "others", which is how they described the East. They were basically the opposite of the East and considered to the active while the Orient was considered to be passive. The Orient existed to be ruled and dominated.

The Orientalist scholars did not distinguish among the countries of the region. The term "Oriental" was used to describe the Middle East and Near East and Far East. All of these different cultures were basically lumped into one for the purposes of study. The reason for the study was political also. The focus is on language and literature and the study in the area of philology where the already written texts and other works were translated as a means of studying the culture. The misrepresentations of the Orient and the various aspects of the Orient led to confusion and misinterpretation by the scholars and politicians.

Said points out the errors in the ways of these early Orientalists. He questions the claim that the Orient was biologically inferior to the European and thus required domination. Said wants the study to focus on the human experience of the cultures and societies. He points out the errors in many of the earlier studies. The Orientalists, and therefore the Europeans, did not understand the Muslim or Oriental and were afraid, based on their fears. Their studies propagated these fears and persisted until a certain level of understanding was reached. This occurred after World War I when the study of the Orient shifted from Europe to the United States and became part of the area studies of various social science departments at universities. The Orient should be viewed for itself and its own cultures and societies and not viewed in the concept of Western perspective. Said's perspective basically led to a difference in the way the Orient was approached in studies, which led the field into a more modern approach.

More summaries and resources for teaching or studying Orientalism.