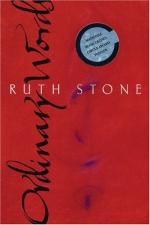 Ruth Stone
This Study Guide consists of approximately 29 pages of chapter summaries, quotes, character analysis, themes, and more - everything you need to sharpen your knowledge of Ordinary Words.

In part, Stone's poem is an exploration of the expectations and disappointments of marriage in the 1950s. In The Way We Never Were: American Families and the Nostalgia Trap (2000), Stephanie Coontz argues against representations of the 1950s American family as wholesome and virtuous, claiming that notions of traditional family values are rooted more in myth than fact.

Stone won the National Book Award for poetry in 2002 for In the Next Galaxy, published by Copper Canyon Press.

More summaries and resources for teaching or studying Ordinary Words.

Ordinary Words from Gale. ©2005-2006 Thomson Gale, a part of the Thomson Corporation. All rights reserved.