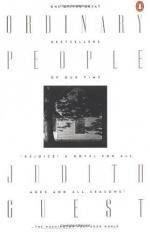 This detailed literature summary also contains Topics for Discussion and a Free Quiz on Ordinary People by Judith Guest.

Written by Judith Guest, Ordinary People was first published in 1976 by the Viking Press, Inc.

Ordinary People is the story of a family in Illinois that has for years given people the impression that they are the perfect American family. However, there are dangerous flaws that even the three main characters aren't aware of until the youngest son tries to commit suicide. Driven by his guilt over the death of his brother in a boating accident just a year prior, Conrad Jarrett, age sixteen at the time, cuts his wrists. His father finds him in time, and his parents have him committed to a hospital to try to work through his issues.

The story begins shortly after Conrad returns from the hospital, and he is having a difficult time adjusting. At school, he's a year behind his friends. He had been a top member of the swim team before the suicide attempt, but now he has no motivation, and despite encouragement from his parents and an offer of extra help from the coach, he eventually quits the team.

At home, Conrad's father Calvin is overly solicitous with him. His mother, Beth, seems to have little to do with him other than to offer directives and admonishments. While there are many moments early in the book when Cal and Beth share intimate moments, there are no outward expressions of love or signs of affection for Conrad from either of them.

Conrad begins to rebuild his life after he meets Dr. Berger, a psychiatrist recommended by his doctor at the hospital. Dr. Berger is unconventional, but he's able to reach Conrad. When Cal notices the differences in his son, he makes an appointment for himself with the doctor. Struggling with his guilt over Conrad's suicide attempt, and a growing disillusionment with his marriage and his wife, he hopes the doctor can help him find out who he is.

Little by little, Conrad makes friends at school, his grades improve, and he begins dating. These things all help him feel more normal and like he's gaining some control over this thoughts and his life. While Conrad's life is coming back together, his parents' livesare falling apart. His father realizes that Beth isn't the perfect person that he thought she was; and Beth is ever more critical about the amount of time Cal spends worrying about Conrad.

Conrad has a big revelation when he sees a poster that reminds him of his brother and he is able to think about a trip they took together without feeling any pain. In fact, he is pleased to note that the memories actually make him feel better. Beth learns from a friend that Conrad quit the swim team and an argument ensues. Beth and Cal continue arguing after Conrad goes to bed widening the gap between the two of them.

After Christmas, Beth and Cal head to Texas to visit her brother and his family. The two of them have a fight that stays with them through the plane ride home. While they're gone, Conrad copes with the suicide of a girl he met at the hospital and establishes a deeper relationship with Jeannine Pratt—a girl he met in the school Choir.Jeannine tells him about a time in her life when she had many of the same questions and feelings of depression that Conrad did before he tried suicide. She acted out by doing drugs and stealing.

Beth decides to leave Cal. She feels shut out and disillusioned about their relationship. She tells Cal to tell Conrad that she's gone. While Cal is very confused and low, Conrad is feeling renewed. He senses what has happened and doesn't question his father too much. He isn't surprised that his mother left without saying goodbye. He tells his father that he loves him, and Cal replies in kind. This might be the first time these feelings have ever been verbalized. In the epilogue Conrad thinks about his mother and realizes that she loves him in her own way.