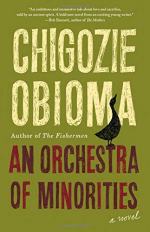 Chigozie Obioma
This Study Guide consists of approximately 44 pages of chapter summaries, quotes, character analysis, themes, and more - everything you need to sharpen your knowledge of Orchestra of Minorities.

This detailed literature summary also contains Quotes and a Free Quiz on Orchestra of Minorities by Chigozie Obioma.

The following version of this book was used to create this study guide: Obioma, Chigozie. An Orchestra of Minorities. New York: Little, Brown and Company, 2019.

The novel opens in Umuahia, Nigeria, circa the year 2007. Chinonso Olisa is about 30 years old and makes a living as a poultry farmer. (The novel is narrated by Chinonso’s guardian spirit, called a ‘chi.’) Chinonso loves his work, but he leads a generally lonely life. One day, he sees a woman on a bridge preparing to commit suicide. Chinonso persuades her not to kill herself. They encounter each other by chance a few weeks later. The woman introduces herself as Ndali. She is studying to be a pharmacist. Ndali begins visiting Chinonso regularly, and they soon fall deeply in love. Chinonso proposes marriage to Ndali, and she accepts.

Ndali invites Chinonso to visit her family’s home. When Chinonso arrives, it soon becomes apparent to him that Ndali’s family is extremely wealthy. Ndali’s father and brother are openly hostile towards Chinonso. They are prejudiced against him because he is not wealthy or highly educated. Ndali’s father says that he should not marry Ndali. A few days later, Ndali suggests that her family might be more accepting of Chinonso if he had a college degree. By chance, Chinonso encounters a former classmate back from Chinonso’s school days. The friend, Jamike, is attending Cyprus International University. He encourages Chinonso to apply, so Chinonso does so and is accepted.

Ndali is upset that Chinonso will be attending school in another country, but she promises that she will wait for him and marry him when he finishes his degree. Chinonso sells his farm to afford school fees. He gives the money to Jamike, as Jamike promises to handle the transfer of the money to the school. When Chinonso arrives at the university, in Cyprus, it soon becomes apparent that Jamike is not there. Also, Jamike did not use Chinonso’s money to pay Chinonso’s fees, which means that Jamike likely stole the money and ran away with it.

A Nigerian student at the school befriends Chinonso. The student, named Tobe, helps Chinonso investigate where Jamike might have gone. They even report the matter to the Cyprus police force, but Jamike is not found. Chinonso becomes despondent. Not wanting to worry Ndali, he does not tell her about the predicament.

A few days after Chinonso’s arrival in Cyprus, he meets a woman named Fiona. She is originally from Germany, but she lives in Cyprus and works as a nurse. She flirts with Chinonso and invites him to her home. Soon after Chinonso and Fiona arrive at her home, a man named Ahmed appears. He is Fiona’s husband. Ahmed flies into a jealous rage and attacks Fiona. Chinonso then attacks Ahmed in order to protect Fiona. Chinonso is soon arrested. Fiona and Ahmed falsely accuse Chinonso of raping Fiona. The court is prejudiced against Chinonso because he is black, and the court believes Chinonso’s white accusers.

Chinonso is convicted and sentenced to prison in Cyprus. His conviction is eventually overturned, but he has spent four years in prison by then. He has suffered traumatic events in prison, such as being raped. He returns to Nigeria. By chance, he encounters Jamike. Chinonso wants to kill Jamike, but Chinonso is surprised to see that Jamike is deeply repentant. Jamike repays the money he stole, and he pledges undying loyalty to Chinonso. Chinonso is later devastated to learn that Ndali has married and has a son. However, Chinonso soon correctly deduces that he is the father of Ndali’s son.

Chinonso tries to reconnect with Ndali. Ndali heard about Chinonso’s conviction years prior, but she knew from the start that the accusations were almost certainly false. Nonetheless, Ndali does not want to resume her relationship with Chinonso, as she is married, and she does not want to disrupt the life she has made for herself. Chinonso is driven to the brink of insanity by the many traumas and disappointments that he has suffered. In a desperate desire for some type of catharsis, he vengefully sets fire to Ndali’s house. He believes it to be empty when he starts the fire, but it soon becomes apparent that Ndali was inside and that she died in the fire.

More summaries and resources for teaching or studying Orchestra of Minorities.