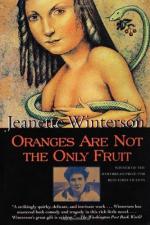 Oranges Are Not the Only Fruit Summary & Study Guide

Jeanette Winterson
This Study Guide consists of approximately 36 pages of chapter summaries, quotes, character analysis, themes, and more - everything you need to sharpen your knowledge of Oranges Are Not the Only Fruit.

Oranges Are Not the Only Fruit Summary & Study Guide Description

Oranges Are Not the Only Fruit Summary & Study Guide includes comprehensive information and analysis to help you understand the book. This study guide contains the following sections:

This detailed literature summary also contains Topics for Discussion and a Free Quiz on Oranges Are Not the Only Fruit by Jeanette Winterson.

Jean lives "for a long time" with her mother and father. That seems a sarcastic statement until she reveals that she is adopted, meaning that she didn't always live with her parents. She immediately begins a description of her mother. She says that her mother lives for conflict. For example, her mother wants the Mormons to come to her door and deliberately chooses the windiest days to hang out sheets so that she'll have to do battle to keep them off the ground and on the line. Her mother has a list of friends and enemies. Slugs and the people next door are among the enemies. Slug pellets, God, and Jean are among the friends. Jean's mother is a devout woman. Jean says that she "was very bitter" about the fact that the Virgin Mary "got there first", so that Jean's mother did the next best thing—arranged for the adoption of a foundling. That "foundling" is Jean.

Jean is taught at home for a time, largely through the use of the Bible and scriptures. Authorities then insist that she attend school. She doesn't fit in and is scolded for frightening the other children with her stories of hell and damnation. Her mother tells her that they are to be set apart and Jean notes that her mother has few friends, and none outside the church.

Jean becomes close to a woman named Elsie. Their friendship seems to develop when Jean is in the hospital after having surgery to restore her hearing. Jean's mother believes she's caught up in the rapture of the Lord and it's a neighbor who discovers that Jean actually can't hear. Jean's mother is busy with church activities and Elsie is the one who stays with her in the hospital and who cares for her when she returns home until her mother returns from a church trip. Jean becomes caught up in the activities of the church and is soon presenting sermons of her own. When her sexual orientation comes into question, the council that oversees the church notes that women have overstepped their bounds with regard to church services. Jean says that she'd always been surrounded by strong women and sees nothing wrong with the role they play, but her mother disagrees.

When she is a teenager, she admits that she is gay and enters into a sexual relationship with another young woman. Perhaps because she feels guilty about the relationship, she attempts to tell her mother what she feels. Her mother discerns the true nature of the relationship and takes the matter to the pastor, who calls Jean and her friend, Melanie, to the front of the church demanding that they repent. Melanie does immediately and is later married, though Jean notes that she's soon a "bovine" and then a vegetable. Jean does repent and seems to be forgiven but then enters into a similar relationship with Katy, another young woman—a new convert to the church. They are likewise discovered and confronted, but Jean refuses to repent and leaves home at her mother's demand, which seems to be prompted by the pastor. She lives with a teacher, works part time on an ice cream truck and part time in a funeral parlor while finishing school, then takes a job in a mental hospital because the job includes a room. She returns home for a Christmas holiday and notes that her mother acts as if she'd never been away. There have been some changes, including the disbanding of the Society for the Lost because of corruption among its leaders.

Jean is raised to believe in the power and importance of the church, but near the end of the story admits that she's not certain God is real. She seems to come to no conclusions but seems somewhat more at peace with her life and her choices.

Oranges Are Not the Only Fruit from BookRags. (c)2022 BookRags, Inc. All rights reserved.