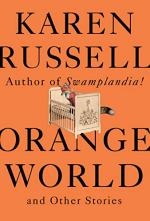 Karen Russell
This Study Guide consists of approximately 52 pages of chapter summaries, quotes, character analysis, themes, and more - everything you need to sharpen your knowledge of Orange World and Other Stories.

Orange World and Other Stories Summary & Study Guide includes comprehensive information and analysis to help you understand the book. This study guide contains the following sections:

This detailed literature summary also contains Quotes and a Free Quiz on Orange World and Other Stories by Karen Russell.

The following version of this book was used to create this study guide: Russell, Karen. Orange World and Other Stories. New York: Alfred A. Knopf, 2019.

Orange World is a collection of eight short stories. “The Prospectors” is set in the 1930s in Lucerne, Oregon. Two young women, Aubergine and Clara, have recently arrived to attend a party for the opening of a new ski lodge, called the Evergreen Lodge. These women have crossed the country surviving by their wits, charming and later robbing wealthy men, and they hope to do the same at the Evergreen. However, when they exit the chairlift at the top of the mountain and enter the party, they discover they are not at the Evergreen, but at the Emerald Lodge. This lodge collapsed in an avalanche two years prior, killing the craftsmen who were working inside. The ghosts of these men are the party's sole attendees, and Clara and Aubergine must fight their way out of the lodge lest they become ghosts themselves, trapped forever in this netherworld.

In “The Bad Graft,” young lovers Andy and Angie visit Joshua Tree National Park on a cross-country trip. The spirit of one of the trees infiltrates Angie's body and mind, and she finds herself battling strange impulses, and unable to venture more than a few miles from the park. At the end of the story, the tree attempts to compel Angie to stab Andy, but she manages to wrest back control of her actions at the last second. This reprieve may be short-lived, as a park ranger remarks that the Joshua tree is a “hardy species” whose “roots go deep” (66).

“Bog Girl: A Romance” is set in an unnamed European island famous for its peat farming. While working in a bog, 15-year-old protagonist Cillian Eddowis discovers the two-thousand-year-old preserved corpse of a teenage girl. He falls in love with her, despite his mother's protests, and his passionate ardor gains him popularity at school. Later, however, the Bog Girl comes to life, and Cillian is terrified by her. Acting on his mother's guidance, Cillian returns the girl to the bog, where she dissolves into the peat.

“Madame Bovary's Greyhound” is centered around the dog of the protagonist of Gustave Flaubert's novel. Djali the greyhound is a devoted canine companion, until one day she finds that her passion for her mistress has cooled. Impulsively, Djali runs off into the woods, where she begins a feral existence, hunting for food and encountering predators. One day, she falls into a ravine and breaks her leg. She is near death when she is discovered by a passing gameskeeper who takes her in. At the end of the story, the gameskeeper and Madame Bovary have a chance encounter, and Djali must choose between her former and present owners. She chooses the man who saved her.

In “The Tornado Auction,” narrator Robert Wurman is a retired tornado farmer whose wife recently died, and whose adult daughters live across the country. On a whim, Robert buys a tornado at auction and begins cultivating it in his barn. He recalls 15 years earlier, when his wife forced him to retire after a tornado picked up one of their daughters, causing injury. This event recurs when Robert is struck down by his tornado. Hearing an account of this from Wurman's friends, his daughters call and beg him to sell the tornado, but he refuses. The tornado breaks free from the barn again and joins a passing natural storm. Wurman follows it in his truck, and plans to wait there and allow the tornado to kill him, but then has a change of heart, imagining his daughters being forced to identify his body.

“Black Corfu” takes place in Korčula (an island in the Adriatic Sea) in 1620. The island is suffering from a zombie outbreak, and the main character of the story is a surgeon responsible for severing the hamstrings of the dead so they cannot walk the earth. When an apprentice claims the doctor made a mistake, resulting in a roving zombie, the doctor is driven mad by this blow to his reputation. He believes the only way to remedy the situation is to kill himself and sever his own hamstring, but when he does this, he makes the very mistake he had claimed would be impossible, and he awakens as a zombie.

In “The Gondoliers,” narrator Janelle Picarro is one of four sisters who work in post-apocalyptic underwater “New Florida” (197) ferrying passengers to their destinations using a heightened sense of hearing. She takes on a fare traveling to the seawall, a dam that was built in an unsuccessful attempt to stop the flood that happened before Janelle was born. As they travel, Janelle learns that the passenger was one of the engineers that built the seawall, and that his family died in the flood. In response, she tells him about the “deadspot” (208), a place in the water where she has found a sense of calm and solitude that she craves. When a storm begins to brew, Janelle refuses to take the passenger further, and the two engage in a scuffle. The man goes overboard, and Janelle is lost. Her sister Viola arrives shortly thereafter, and the story ends with the two women seemingly trapped inside the deadspot.

In “Orange World,” a woman named Rae who has suffered a series of miscarriages makes a deal with the devil; it will protect her unborn baby if she agrees to breastfeed it each night in the gutter near her house. After the baby is born, Rae feeds the devil as she agreed to, but eventually confides in the other women in her new mothers’ group. They claim to have also been visited by the devil, and assure Rae that it has no power to help nor harm her child. With their encouragement and help, Rae traps the devil in a cage, and the women release it in the desert.

More summaries and resources for teaching or studying Orange World and Other Stories.

Orange World and Other Stories from BookRags. (c)2022 BookRags, Inc. All rights reserved.