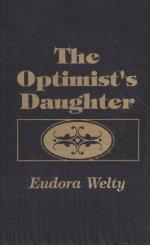 Eudora Welty
This Study Guide consists of approximately 65 pages of chapter summaries, quotes, character analysis, themes, and more - everything you need to sharpen your knowledge of The Optimist's Daughter.

The minister's wife, Mrs. Bolt is an elderly neighbor woman. She is one of the local ladies who gossips about Fay.

Major Bullock is a friend of Judge McKelva. After Judge's death, Major attends the wake and the funeral, making a big show of telling grand stories about his deceased friend. There is an indication that Major may have a drinking problem, although nothing more than a suggestion is made. Major differs from most of the neighbors in that he is sympathetic toward Fay. He embodies southern manners in his attitude toward Fay and when he escorts Laurel safely home in the rain.

Major Bullock's wife, Tennyson, is a neighbor and close friend of the McKelva family. Despite her husband's commanding presence, she seems to be the dominant one in their marriage. She is typical of the women in her community in...

The Optimist's Daughter from Gale. ©2005-2006 Thomson Gale, a part of the Thomson Corporation. All rights reserved.