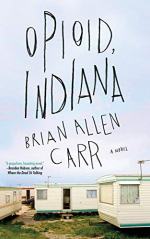 The novel takes place in February of 2018, in a small town in Indiana. The narrator and protagonist, 17-year-old Riggle Quick, refers to the town only as Opioid, Indiana, as the town has been badly affected by America’s opioid addiction epidemic. Riggle used to live in Texas, near the Mexico border, with his two parents. However, his father died in an automotive accident when Riggle was six years old, and Riggle’s mother killed herself two years later. Riggle’s guardian is now Joe, the brother of Riggle’s mother. Riggle lives in Indiana with Joe. Also living with them is Joe’s live-in girlfriend, Peggy. Joe is addicted to opioids and to methamphetamine, and he is sometimes physically abusive.

One day, Riggle receives a one-week suspension from school after he is falsely accused of bringing a vape pen to school. Coincidentally, on the first day of Riggle’s suspension, Joe goes missing. Riggle and Peggy conclude that Joe likely went somewhere to do drugs. Peggy is worried because rent for the following month is due in under a week. Riggle decides to search for Joe and to also search for a job so that he can help pay rent if Joe does not return. Riggle therefore begins spending the days of his suspension looking for Joe and for a job. Each day during the week, Riggle recalls stories that his mother used to tell him. His mother had created a character named Remote, a shadow puppet who told myth-like stories about how each day of the week received its name.

Riggle manages to acquire a job washing dishes at a local restaurant called Broth. The work is arduous but, to a certain degree, fulfilling. Riggle continues to search for Joe, and he occasionally interacts with townspeople. These people include a local autistic man known as Autistic Ross, and a man on a bicycle who is called the Bicycling Confederate (because his bicycle has Confederate flag attached to it), and a waiter at Broth who used to be friends with Joe. Riggle becomes increasingly unnerved when each of these three people coincidentally make a hand gesture highly similar to the Remote shadow puppet. One day, the waiter tells Riggle about an abandoned house where Joe used to go to do drugs.

Soon, Riggle momentarily believes that Peggy murdered Joe. However, when he confronts her with this accusation, he soon realizes that it is ridiculous and false. Riggle and Peggy decide to keep Joe’s death a secret so that Riggle is not sent to live in a state-run group home.