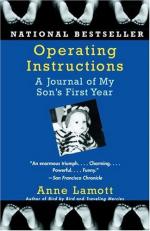 Anne Lamott
This Study Guide consists of approximately 55 pages of chapter summaries, quotes, character analysis, themes, and more - everything you need to sharpen your knowledge of Operating Instructions.

In this brief section, Anne writes about Pammy's discovery that she has breast cancer. The cancer is an aggressive form, and Pammy is scared. Anne is scared as well and forces herself to focus on Sam so that she does not fall into deep despair. Anne's thirty-sixth birthday comes and goes during this month, as does her deceased father's birthday. Even though it has been eleven years since her father's death, Anne still grieves and misses him terribly. She and Pammy spend the afternoon at the movies while her mother watches Sam.

The news that Pammy is facing breast cancer has hit Anne hard. Just as she has managed to use Sam to keep her from returning to her addictive behavior, Anne again turns to her son to keep her from becoming overly despondent with this news. As she writes on...

(read more from the Part 9 Summary)

More summaries and resources for teaching or studying Operating Instructions.

Operating Instructions from Gale. ©2005-2006 Thomson Gale, a part of the Thomson Corporation. All rights reserved.