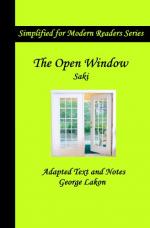 Saki
This Study Guide consists of approximately 32 pages of chapter summaries, quotes, character analysis, themes, and more - everything you need to sharpen your knowledge of The Open Window.

It is no surprise that Mrs. Sappleton's niece tells a story that is easy to believe. She begins with an object in plain view, an open window, and proceeds from there. The window is obviously open, but for the reasons for its being open the reader is completely at the mercy of Mrs. Sappleton's niece, at least while she tells her story. The open window becomes a symbol within this story-within-a-story, and its appearance becomes its reality. When Mr. Nuttel (and the reader) are presented with a contrary reality at the end of the story, the result is a tension between appearance and reality that needs to be resolved: Which is real? Can they both be real?

Were it not for deception, this story could not happen. The action and irony of the story revolve around the apparent deception that Mrs. Sappleton' s niece practices...

More summaries and resources for teaching or studying The Open Window.

The Open Window from Gale. ©2005-2006 Thomson Gale, a part of the Thomson Corporation. All rights reserved.