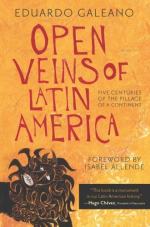 Open Veins of Latin America: Five Centuries of the Pillage of a Continent Summary & Study Guide

Eduardo Galeano
This Study Guide consists of approximately 29 pages of chapter summaries, quotes, character analysis, themes, and more - everything you need to sharpen your knowledge of Open Veins of Latin America.

Open Veins of Latin America: Five Centuries of the Pillage of a Continent Summary & Study Guide includes comprehensive information and analysis to help you understand the book. This study guide contains the following sections:

This detailed literature summary also contains Topics for Discussion and a Free Quiz on Open Veins of Latin America: Five Centuries of the Pillage of a Continent by Eduardo Galeano.

Open Veins of Latin America: Five Centuries of the Pillage of a Continent by Eduardo Galeano is the story of the plundering of Latin American countries by foreign invaders. The historical account covers roughly five centuries. The book originally written to cover Latin American events and history through 1970 was provided with an addendum in 1978. This new chapter is entitled "The Last Seven Years." This last chapter is an update to information provided in the first version and is an account of reaction to the book and progress made since it was first published.

The chronology begins with the discovery of Latin America by Christopher Columbus in 1492. Columbus had been sponsored by the Spanish Queen Isabella to sail west to India and to its riches. The discovery of the giant land mass in between—the Americas—was a surprise to Columbus and his crew. The inhabitants were called "Indians" since Columbus thought he had reached India. It was not long before the Spanish monarchy realized the prize they had accidentally discovered. Following the initial discovery, other Spanish explorers and their conquistadors soon returned to the land that was so rich in natural resources. The first pillage was the massive lodes of silver and gold discovered in this wild, untamed world. Hernan Cortes invaded the Aztec civilization which was an advanced society teeming with gold and silver. Montezuma feared the white-skinned, yellow-haired invaders who rode "tall deer," were covered in metal and aimed devastating fireballs at them. The Aztec leader determined that the invaders were returning gods and offered Cortes gifts of gold. But mere gifts were not enough, the conquistadors wanted it all. Although outnumbered by far, Cortes easily conquered these naïve, terrified people.

The Portuguese soon followed invading what is current day Brazil and plundering their rich resources. The region known as the Minas Gerais region contained the largest gold deposit ever found up to this time in history. Despite its vastness, the Portuguese in short order pillaged all the gold from the region. Although precious metals—gold and silver—were the first targets of the invading Spanish and Portuguese oppressors, over the years the resources of the continent were awe-inspiring and seemingly never-ending.

Although not indigenous to Latin America and transplanted originally by Columbus, sugar was a commodity that was to some in the world market as valuable as gold or silver. Sugar plantations sprung up in Brazil, Veracruz, on Caribbean islands and the Peruvian coast. However, just as gold and silver before it, the rich resource was plundered by foreign interests on the back of the poor workers who barely survived on the menial wages or the food they worked for. Bananas, coffee, cacao, nitrates, cotton, rubber, petroleum among others were all plundered by foreign interests. The foreign powers took the riches leaving behind poorer, more dependent countries, spent soil and impoverished workers who had no hope of a better life.

The sophisticated English got into the act creating lop-sided agreements with Portugal and Spain, taking from them the lion's share of profits and benefits and leaving the poor, ravished countries in Latin America in even worse conditions. The monoculture societies in Latin America could not overcome their dependence on one-resource production and could never accumulate enough resources to create its own industrial infrastructure in order to provide finished products as opposed to just natural resources. For centuries the foreign powers engaged in slave trade, bringing literally millions of Africans into Latin America. The slaves and the native workers faced similar conditions—health issues, abuse, hunger and oftentimes early death.

As the centuries progressed, Latin American dictators entered into their own self-serving agreements with foreign interests. These dictators did little to further the cause of their country—they were more interested in gaining profits and position for themselves. In many ways, these dictators did as much harm to their countries as did the foreign invaders. They helped the plunder, abuse and abandonment of their own lands and people to continue. The pillage and abuse of Latin America continues on in modern times. The author views the the United States as the new conquistador. The US is continuing on in the tradition of its European cousins by entering into agreements with Latin American countries that favor them in tariffs, taxes and profits. Although there has been some progress along the years, Latin America has a long way to go. The abuse it has suffered over five centuries is heartfelt and part of their culture. It is not an easy task for the nations to recover from the despicable and degrading history thrust upon them at the hands of foreign invaders.

Open Veins of Latin America: Five Centuries of the Pillage of a Continent from BookRags. (c)2022 BookRags, Inc. All rights reserved.