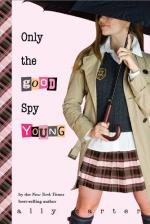 Ally Carter
This Study Guide consists of approximately 40 pages of chapter summaries, quotes, character analysis, themes, and more - everything you need to sharpen your knowledge of Only the Good Spy Young.

Only the Good Spy Young Summary & Study Guide includes comprehensive information and analysis to help you understand the book. This study guide contains the following sections:

This detailed literature summary also contains Topics for Discussion and a Free Quiz on Only the Good Spy Young by Ally Carter.

This novel for teens, primarily young women, is the fourth in a series about trainee spy Cammie Morgan. In this entry, Cammie finds herself the target of kidnapping attempts, taking the lead in missions to retrieve important information and drawn further into her complicated relationship with cute fellow trainee spy Zach. As it builds to an explosive climactic confrontation between Cammie and operatives of the evil Circle, the narrative also explores themes related to friendship and loyalty, identity, and the tension between entrapment and dreams of freedom.

The novel begins with Cammie enjoying a relaxing vacation with her best friend Rebecca and her family in London, England, a vacation interrupted by the unexpected appearance of Joe Solomon, one of Cammie and Rebecca's favorite teachers from the The Gallagher Academy for Exceptional Young Women. Even while he and Rebecca are being surrounded and confronted by CIA agents anxious to take him into interrogative custody, Solomon gives Cammie an urgent message, jumping into the Thames River once the message has been delivered.

After a brief but intense period of interrogation in London (in which she is interviewed by an operative she describes as "hot"), Cammie and Rebecca are returned to school in America, where they are reunited with their best friends and fellow trainee agents Liz and Macey. At first, neither Cammie nor Rebecca reveal what happened in London, having been told by several adult operatives to keep it all secret. But when the operatives learn that Solomon's replacement at the Academy is none other than the man who interrogated Cammie in London, an MI6 agent named Edward Solomon, Cammie and Rebecca break their silence and tell their friends everything.

The four operatives then begin an investigation into both Townsend and the meaning of Solomon's mysterious message. In this they are aided by the unexpected, often mysterious intervention of Zach Goode, a trainee spy from the Blackthorne Institute for Boys on whom Cammie has a passionate crush. Zach eventually reveals that he is in secret contact with Solomon and that there is a journal hidden in the basement of the Academy that he (Solomon) wants Cammie to have. She and the other operatives plan and execute an excursion into the vault where the journal is kept, discovering as they're decoding it that it was in fact written by Cammie's presumed-dead father, Solomon's best friend and ally in a covert operation to break the Circle.

Zach then tells the four Gallagher Girls that there is, in fact, a second journal kept in the caves deep beneath the Blackthorne Institute. With the help of Cammie's mother and several other adult operatives, Zach and the Gallagher Girls execute an excursion into the caves. Zach and Cammie retrieve the journal and come face to face with Solomon and several Circle operatives who are torturing and interrogating him. Zach and Cammie are captured, and one of the operatives reveals that she is Zach's mother! Quick thinking on the part of Zach and Solomon enables Cammie to escape, the cave behind her exploding. In a final encounter, Cammie is momentarily prevented from attempting to escape further when Zach's mother suggests that Cammie's father is actually alive, but Cammie makes a last-ditch effort to get away, and jumps into a nearby river. She is rescued by her own mother and Townsend who take her to a hospital where she learns that both Zach and Solomon survived the explosion.

After handing over the retrieved journal to Zach, Cammie resolves to leave the Academy and to go in search of the answers to the many questions in her life such as why the Circle is after her, whether her father is alive, and what she can do to prevent the Circle's power and influence from becoming even more expansive. In doing so, she hopes that removing herself from her friends and loved ones will keep them safe from the danger that seems to seek her out no matter where she goes.

More summaries and resources for teaching or studying Only the Good Spy Young.

Only the Good Spy Young from BookRags. (c)2022 BookRags, Inc. All rights reserved.