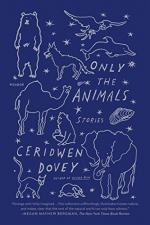 Plot Summary
+Chapters Summary and Analysis
The Bones: Soul of Camel, Died 1892, Australia
Pigeons, A Pony, The Tomcat, and I: Soul of Cat, Died 1915, France
Red Peter’s Little Lady: Soul of Chimpanzee, Died 1917, Germany
Hundstage: Soul of Dog: Died 1941, Poland
Somewhere Along the Line, the Pearl Would be Handed to Me: Soul of Mussel, Died 1941, United State of America
Plautus: A Memoir of My Years on Earth and Last Days in Space: Soul of Tortoise, Died 1968, Space
I, the Elephant, Wrote This: Soul of Elephant, Died 1987, Mozambique
Telling Fairy Tales: Soul of Bear, Died 1992, Bosnia and Herzegovina
A Letter to Sylvia Plath: Soul of Dolphin, Died 2003, Iraq
Psittacophile: Soul of Parrot, Died 2006, Lebanon
Free Quiz
Characters
Symbols and Symbolism
Settings
Themes and Motifs
Styles
Quotes
Order our Only the Animals: Stories Study Guide

Ceridwen Dovey
This Study Guide consists of approximately 86 pages of chapter summaries, quotes, character analysis, themes, and more - everything you need to sharpen your knowledge of Only the Animals.

Only the Animals: Stories Summary & Study Guide includes comprehensive information and analysis to help you understand the book. This study guide contains the following sections:

This detailed literature summary also contains Quotes and a Free Quiz on Only the Animals: Stories by Ceridwen Dovey.

The following version of this book was used to create this study guide: Dovey, Ceridwen. Only the Animals. Farrar, Straus and Giroux, 2015. First American edition.

Dovey's collection of short stories has no one coherent plot, but instead offers ten distinct narratives, each of which relates the story of its narrator's death. Almost every story in the collection is written in the first person, and all of them are written using past-tense narration. Although each animal narrator lives in his / her own time and place, they each engage with the problems of life and death, and everything in between. In particular, these animals consider the questions of authenticity, communication, loneliness, companionship, and, above all, the question of where meaning is found. Some narrators come to uplifting epiphanies by their story's end, while others become figures of tragedy. Each, however, presents an honest picture of what it is to be alive in the world.

The first story, "The Bones," tells the story of a camel in Australia, who listens to a bigoted poet's view of the world, and is eventually shot by his own master. "Pigeons, a Pony, the Tomcat and I" tells the story of a lesbian cat, so in love with her owner (the famous French novelist, Colette) that she follows her owner to the trenches of WWI. "Red Peter's Little Lady" is a story composed of letters exchanged between Red Peter (an ape performing humanness), Hazel (Red Peter's future wife, an ape being transformed into a human), and Evelyn (Hazel's caretaker). As story progresses, the reader learns of Red Peter's love for Evelyn, his opinion on humanity, and his foolish renunciation of his animal self.

Dovey's next two stories take place during WWII. The first, "Hundstage" tells the story of a german shepherd belonging to a high-ranking Nazi officer. Although the dog dies exiled from his master, he remains loyalty to the Nazi party until his last breath. "Somewhere Along the Line, the Pearl Would be Handed to Me" tells the story of two mussels journeying through the ocean, searching for meaning, only to find a meaningless death in the horror of Pearl Harbor.

"Plautus: A Memoir" tells the story of a literary tortoise, searching for both complete solitude and perfect companionship, only to find her death in space. Along the way, she encounters famous literary figures, ranging from Virginia Woolf to Alexandra Tolstoy to George Orwell. "I, the Elephant, Wrote This" jumps ahead thirty years to the Mozambique Civil War, telling the story of an elephant herd dedicated to preserving the stories of their ancestors. "Telling Fairy Tales" takes place during the Bosnian Civil War, relating the story of two bears and a witch exchanging fairy tales amidst one of the most atrocious conflicts of the 20th century. "A Letter to Sylvia Plath" features Dovey's most self-aware narrator, a dolphin named Sprout, who addresses the story of her suicide to Sylvia Plath. Finally, Dovey closes her collection with "Psittacophile," the story of a parrot who dies during the Israeli airstrike in Lebanon.

Although each story differs radically in time and place, each story forces the reader to reconsider their definition of "human" and "animal." Through these colorful, distinct portraits, Dovey reveals that the most unexpected voices can reveal the truth about ourselves, arguing that silenced communities must be heard.

More summaries and resources for teaching or studying Only the Animals: Stories.

Only the Animals: Stories from BookRags. (c)2022 BookRags, Inc. All rights reserved.