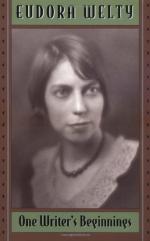 Eudora Welty
This Study Guide consists of approximately 37 pages of chapter summaries, quotes, character analysis, themes, and more - everything you need to sharpen your knowledge of One Writer's Beginnings.

This detailed literature summary also contains Topics for Discussion on One Writer's Beginnings by Eudora Welty.

One Writer's Beginnings by Eudora Welty is Welty's autobiography which details her childhood and certain factors that influenced her writing career. The first chapter of the book focuses on Welty's childhood and immediate family while the second chapter details her parents' childhoods with an emphasis on their family histories. The final chapter realigns the focal point to Eudora Welty by examining her early adulthood. One Writer's Beginnings is a very interesting and informative autobiography, written by an exceptional woman and author.

In the first chapter, "Listening," Eudora Welty describes her early childhood, which includes her parents' focus on learning and encouraging their children to read. Eudora loves books and reading from a very young age; before beginning to write, she listens for stories instinctively. She becomes a privileged observer by listening to her parents' conversations. Eudora Welty attends Jefferson Davis Grammar School and borrows many books from Jackson's Carnegie Library. Although she enjoys reading the Bible for herself, Eudora does not find a reverence for the holiness of life in organized religion. Welty's mother is relieved when Eudora decides to be a writer because her mother believes it is a safe occupation.

In "Learning to See," the second chapter, the Welty family takes a summer trip to West Virginia and Ohio in 1917 or 1918 to visit both of her parents' families. Chestina reveres and is devoted to her parents, Ned Andrews and Eudora Carden Andrews. Christian Welty meets and falls in love with Chestina Andrews while she is a schoolteacher in West Virginia. After their marriage, they relocated to Jackson, but Chestina takes a piece of the mountains to Jackson with her. The mountains of West Virginia give Eudora Welty a taste for independence, which is an inheritance from her mother. The Welty family visits Christian's family in Ohio next. Although Christian is strongly devoted to his father, Jefferson Welty, he does not tell his children stories about his family because he is more interested in the future than in the past. Eudora is excited to return to her family's home on Congress Street in Jackson, Mississippi. Life events find their own order in their significance as opposed to chronology.

The final chapter, "Finding a Voice," describes Eudora Welty's train ride with her father to West Virginia; this journey, and travel in general, influences Welty's writing. After her father's death, Eudora learns that her father often took the same train ride to visit her mother while they were engaged. When she finds her parents' love letters, she learns of a different, youthful side to her parents. Eudora attends Mississippi State College for Women as a freshman and sophomore but transfers to University of Wisconsin for her last two years of college. Christian Welty works at Lamar Life until he dies of leukemia at the beginning of the Great Depression. Eudora's first full-time job is at the state office of Works Progress Administration, taking photographs during the Great Depression. Eudora travels to New York City to attempt to sell stories and photographs, but she is eventually discovered in Jackson by Diarmuid Russell and John Woodburn. Eudora Welty invents the characters in her works, but she borrows aspects from people that she has met in the flesh. Memory is a living thing that joins and lives in one's recollection. Eudora Welty is a writer who came from a sheltered life, which can be daring as well because all serious daring starts from within.

More summaries and resources for teaching or studying One Writer's Beginnings.