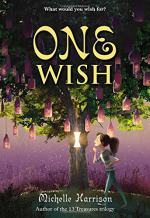 Get One Wish from Amazon.com
View the Study Pack
Study Guide
Order our One Wish Study Guide

Michelle Harrison
This Study Guide consists of approximately 47 pages of chapter summaries, quotes, character analysis, themes, and more - everything you need to sharpen your knowledge of One Wish.

One Wish Summary & Study Guide includes comprehensive information and analysis to help you understand the book. This study guide contains the following sections:

This detailed literature summary also contains Quotes and a Free Quiz on One Wish by Michelle Harrison.

The following version of this novel was used to make this study guide: Harrison, Michelle. One Wish. Little Brown and Company. 2016. U.S Edition Hardcover.

The story begins in a store in London, where an unknown man enters a store with an hourglass. However, he is disappointed when it does not give him what he wants and promises an unknown woman that he will bring her back. A second creature tells him they found the boy, but he is protected. The man is able to locate the girl that the boy will meet next, and the two leave to track her down.

An unknown amount of time later, Tanya Fairchild and her mother arrive at their vacation home, Hawthorn Cottage in Spinney Wickett. It is revealed through a fairy in the floorboards that Tanya possesses the second sight; the ability to see fey and their magic. However, Tanya is tormented by the fairies that visit her, and her mother does not believe her. This, along with her parents' recent separation, has created a rift in Tanya’s relationship with her mother. Frustrated by the situation, Tanya goes to the Wishing Tree with her dog Oberon and learns that it is real. When the tree asks for her wish, Tanya considers asking for her parents to get back together. However, she is distracted by a boy that falls out of the tree and drops his own wish as he runs away. Tanya tracks him down at the pier and meets his fairy, Turpin, who leads her to the boy himself; Henry “Ratty” Henratty.

On the way to the van Ratty and his Pa live in, Ratty explains to Tanya various ways to protect herself from the fairies that she has never heard before. She tells him he is the first one she has met with the second sight, and he admits that he is lonely due to his powers too. He then tells her about a water hag named Nessie Needletooth who drowns and eats people who swim in the river. They cross the bridge to his van, but Pa is not home. However, Ratty finds an envelope from his father, and asks Tanya to leave, promising to see her the next day.

However, when Tanya gets home, she struggles to remember details from her meeting with Ratty, and her mom calls her a liar. She is then visited by her four guardian fairies who demand that she never talk to Ratty about them again. In the morning, she realizes that the floorboard feary has sewn her to the bed, as well as binding all of her clothes together with wool. After dealing with it, Tanya leaves to confront Ratty who is attempting to hide a jar near the Wishing Tree. He admits that he is a Memory Weaver, able to seal people’s memories in items, such as a button he stole from Tanya. But her memory of meeting him was too strong, and the button was not enough. He then admits that his Pa is missing, and the letter was clear instructions on what to do, as his Pa believes they have been found. Tanya gives him a lock of her hair so he can wipe her memory when he chooses, but asks Ratty to trust her. He takes her back to the van, but they are tricked by a fey disguised as a missing girl and Ratty is kidnapped. Tanya is forced to run with Tuprin, and narrowly escapes the river girl and Nessie Needletooth after a mysterious Raven (implied to be one of her guardian fairies) arrives.

At Tanya’s house, Tanya gives Turpin a bath and promises to sneak out at night to find Ratty. Turpin also tells her the story of nothing, a guardian fairy who was abandoned by its child and led to believe that it was Nothing. This caused Nothing to develop deep resentment for anyone that stepped into the house, which Turpin believes is happening with the floorboard fairy, Thingy. The two follow the envelope's instructions and sneaks into the dungeons of the castle. There, they find Don, Ratty’s father, who Solomon, the man that kidnapped Ratty, has turned into a toad. He tells Tanya that they need to retrieve an item that contains the memory of a dangerous spell that Solomen wants. However, he wants to visit a pair of fairy sisters to try and change him back.

The three go to the pier and take a special track on a ride called the Rift to a world between worlds where Griselda and Gretchen live. The two sisters used to be Don’s best friends, but started cursing each other when they both fell in love with him. Now, neither of them look remotely human and cannot live a human life. They try to purposely mess up the spell that would turn Don back, but Tanya catches on and memorizes the instructions to ensure it is finished. When it still fails, Griselda tells them of another, much riskier spell. However, the sisters get into another, magic fueled fight. Tanya finds the spell, Turpin steals the ingredients, and the three of them return to the cottage.

As they are working on the spell, Tanya is forced to use a spell called The Sleep of the Dead to knock out her guardian fairies and her mother after the fairies lied to Tanya’s mother about Tanya’s time with Ratty. Tanya puts the spell together and they know they must wait for the moon or a star to come out for the spell to work. They then go to the Wishing Tree and recover an hourglass, the item containing Solomon’s memory. However, it is revealed that it also contains one of Ratty’s memories of his nightmare named Morghul who Ratty accidentally brought to life. Solomon, who wanted to bring back his lost love who he could not save, intended on using Morghul to finish his resurrection spell, even at the cost of Ratty’s life. When Turpin attacked Morghul, it broke the ritual and gave Ratty his memory powers. He lost his memory of Morghul and sealed Solomon’s memories of the spell in the hourglass before they ran. Don hopes to save Ratty without returning either memory.

At night, the group is transported to London where they follow Solomon into the same store from the beginning of the novel. Inside, Tanya finds Ratty in a cage and learns that Morghul is helping Solomon, as he wants Ratty to remember him. Even though Tanya attempts to hide the hourglasses, Morghul locates it and gives it to Ratty. This returns the memory, and Ratty remembers his fear of Morghul, strengthening the creature. Solomon also holds the hourglass and remembers that Morghul is the last piece of his spell. However, the two get into a fight, and Ratty’s terror is so strong that Morghul overpowers Solomon, who falls into his cauldron and dies. The group tries to trick Morghul into thinking Ratty can overcome him, but Ratty’s fear consumes him again. But when Morghul kills Turpin, Ratty’s sadness overwhelms his fear, and he is finally able to destroy Morghul. Don transforms back into a human, and they used the completed spell to revive Turpin, as no one but Solomon knows how to make it.

Back at the cottage, Ratty erases the memories of Tanya’s guardian fairies so they will not be upset at what she did or remember why they were there. He tells her that he will have to erase her own memory of them to protect them both. He promises that he will make his own wish when he is older to come find her, and promises to wait until morning. Tanya waits through the night, as she is sad to know that she will soon forget the only true friends she has ever had. The story ends with Tanya taking her mother to the Wishing Tree and telling her to make a wish.

More summaries and resources for teaching or studying One Wish.

One Wish from BookRags. (c)2022 BookRags, Inc. All rights reserved.