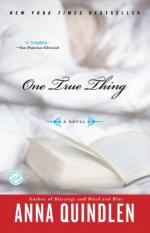 Anna Quindlen
This Study Guide consists of approximately 50 pages of chapter summaries, quotes, character analysis, themes, and more - everything you need to sharpen your knowledge of One True Thing.

This detailed literature summary also contains Topics for Discussion and a Free Quiz on One True Thing by Anna Quindlen.

"One True Thing" is the story of Ellen Gulden and her family in the wake of her mother, Kate Gulden's cancer diagnosis, treatment, and death. At the opening of the story, Kate Gulden is a twenty-four-year-old editor living in New York, who seems to have it all: a great apartment, a great boyfriend, and a great job. She grew up with a very close relationship to her father, George Gulden, a college literature professor who always pushed her to excel in life. George and Ellen have always had an academic bond, speaking about literature in a way that no one else understood, which made Ellen feel superior to the rest of her family, especially her mother. Kate Gulden spent her life as a home maker, dedicating her time to handicrafts and to ensuring that her household was peaceful and nurturing. Ellen always believed that her mother did this willingly, as if she hadn't had any better options. Ellen cannot imagine that Kate would have other aspirations in life than to be considered the perfect wife and mother.

When Kate is diagnosed with cancer, Ellen returns home and is, essentially, blackmailed by her father to leave the magazine she edits to come home and care for Kate full time. Ellen erupts in defiance, but her father will not budge and Ellen knows she cannot refuse him. Ellen packs up her belongings and moves home. Although Kate initially refuses Ellen's help, telling her to get on the next train back to New York, the two women fall into an unexpectedly easy relationship, learning for the first time how to be a bonded mother and daughter. It is clear that neither of the women expected their relationship to grow in this way, as both had resigned themselves many years ago to loving each other from a distance, never quite understanding the other intimately. It had been clear, since Ellen was a little girl, that she had preferred her father, and her mother had always accepted that relationship. Now, however, Ellen's relationship with her father becomes fractured as her resentment for his absence grows. George simply cannot, or will not, cope with his wife's illness and chooses instead to immerse himself in work, refusing to take time off to attend Kate's doctor's appointments or to give her any sort of affection. Ellen begins to realize that she had been wrong about both her parents - her mother, not her father, is the strong parent who had always deserved her idolatry. This, coupled with the pressing evidence of her father's infidelities, devastates Ellen when she realizes that her father is not the man she thought, and she begins a fierce battle to protect her mother from George's remoteness, and from the cancer that is ravaging her body.

Despite her best efforts, Kate begins to deteriorate and there is nothing Ellen can do to save her. Kate becomes dependent on morphine pills to numb her pain, must wear diapers, and in the end, is almost completely bed-ridden. One evening she begs Ellen to help her end her life, saying that Ellen would know what to do. Ellen is horrified by her mother's resignation to death, and horrified to realize that she is too weak to fulfill her mother's dying wish. Shortly after, Kate dies and her death is ruled suspicious - the cause of death: a morphine overdose. Ellen replays the final image of her mother's life over and over and over after she is arrested for her mother's murder. In the final image, George spoons rice pudding into Kate's mouth, bite by bite. Ellen had been unable to look away from the gleam in her mother's eyes, as if her soul had been blazing through as she stared at George. Ellen knows that it was her father who aided Kate in her morphine overdose and it is now Ellen's responsibility to protect him from the charges that will surely be brought up against him. Although Ellen denies that she was involved in her mother's death, she refuses to admit that her father was responsible. In the end, Ellen is acquitted of the charges brought against her, although no one in town actually believes she is innocent. They simply believe that she was justified in this act of euthanasia. Ellen does not speak to her father for eight years, unable to communicate with him, especially regarding her mother. When she inadvertently bumps into George at a theater performance, Ellen learns that he was not responsible for killing Kate, and that Kate prepared the morphine overdose herself.

More summaries and resources for teaching or studying One True Thing.