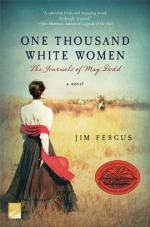 Jim Fergus
This Study Guide consists of approximately 62 pages of chapter summaries, quotes, character analysis, themes, and more - everything you need to sharpen your knowledge of One Thousand White Women.

This detailed literature summary also contains Topics for Discussion and a Free Quiz on One Thousand White Women by Jim Fergus.

In the year 1874, the head of the Cheyenne Sweet Medicine tribe, Chief Little Wolf, journeyed to Washington D.C. with a proposal for President Grant. Dressed in full, colorful Indian regalia, Chief Little Wolf presented his plan to give the government one thousand horses in exchange for one thousand white women. Hoping to end the fighting between the white man and Indians on the American plains, Little Wolf felt that if white women could merge with his tribe and bear children of mixed blood, the new children might bond the two races. Indians and whites would then begin to truly assimilate and learn to live together peacefully. President Grant's wife fainted in shock over the audacity of his daring proposal, not to mention his bizarre and somewhat terrifying appearance. However, in recognition of his peace making efforts, President Grant awarded Little Wolf the Presidential Peace Medal.

Not surprisingly, news of the Chief's proposal caused public outrage, since white women married to wild savages was an unthinkable and ghastly concept. However, after considerable discussion with his closest advisers, President Grant saw the logic of the plan, and quietly formed a new agency, naming it the "Brides For Indians" project, or "BFI." To fulfill their end of the contract with the Cheyennes, the government solicited women from jails and mental institutions to form the first "installment" of white brides for the Cheyennes.

May Dodd, the rebellious daughter of an ultra-wealthy family in Chicago, was abducted and committed by her father to a lunatic asylum. May's two illegitimate children are taken from her, and she is diagnosed as promiscuous, or morally perverted.. The asylum's conditions and so-called medical treatments are intolerably abusive and cruel, perhaps truly bringing about insanity for those patients who are sane when they arrive. May Dodd feels she was improperly and unfairly incarcerated at the asylum and, seeing an opportunity to escape, applies to become a Cheyenne wife. An asylum employee, Martha, who believes May was improperly institutionalized, helps to forge the release documents that provide May with the freedom she has dreamed about. Knowing she will be prosecuted for the forgery if she stays, Martha also joins the BFI. Leaving Chicago with Martha for the wild west and a new life, the journals May kept from March of 1875 through March of 1876 form the story of her days as a white woman living among the Cheyenne Indians. May begins her journal while riding a train on the first leg of her courageous journey. Grisly horror, irrepressible joy, stunning beauty and savage horrors define May's year as the bride of Chief Little Wolf. Through May's journal, Fergus also makes us familiar with May's colorful assortment of friends, as well as some hilarious moments on this wild ride of a story.

More summaries and resources for teaching or studying One Thousand White Women.