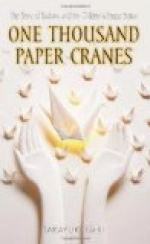 One Thousand Paper Cranes: The Story of Sadako and the Children's Peace Statue Summary & Study Guide

One Thousand Paper Cranes: The Story of Sadako and the Children's Peace Statue Summary & Study Guide includes comprehensive information and analysis to help you understand the book. This study guide contains the following sections:

This detailed literature summary also contains Topics for Discussion on One Thousand Paper Cranes: The Story of Sadako and the Children's Peace Statue by Ishii Takayuki.

One Thousand Paper Cranes by Takayuki Ishii is the story of a young Japanese girl named Sadako Sasaki who became ill from radiation poisoning as a result of the dropping of the atomic bomb on Hiroshima, Japan, the young girl's hometown. World War II was coming to an end when on August 6, 1945, a US B-29 bomber named the Enola Gay dropped the atomic bomb, called Little Boy, on Hiroshima. A nuclear fission reaction set off the devastating explosion.

Sadako was just two years old when the atomic bomb was dropped on Hiroshima. The family home, along with those all around the neighborhood, were literally flattened. Sadako's mother, Fujiko, had to gather her two children and her elderly grandmother after the blast and run for cover. But, as she learned, there was no cover at least none anywhere near her home. Fujiko with her two children in tow headed to a park where a help center had been set up for victims of the firebombings that had been taking place during the war. As they moved through the chaos, they passed dead bodies, maimed people and people crying out for help. Eventually Fujiko was able to flee the city and stay with a relative some forty miles away where the bomb had no impact.

After a few days, Fujiko and her husband Shigeo decided to return to their flattened home to begin the process of starting over. Many people were very ill from the radiation poisoning and of course many were badly injured. Over one-hundred thousand died immediately from the blast. Even though their home had been destroyed and her grandmother died from burns and radiation, Fujiko and Shigeo felt fortunate that their two young children seemed to be unscathed.

However, once a person is exposed to radiation, even a small amount, it will eventually manifest in disease and will result in death. Sadako, a happy and popular student, became ill from the effects of radiation poisoning ten years after the bombing when she was twelve. At first her condition didn't seem serious, but the doctors spotted the conditions that were generally referred to as atomic bomb disease. After testing, the doctors told Sadako's father the horrific news that she had a rare form of leukemia and would live only for another three months to a year. Her condition deteriorated quite rapidly and soon she was confined to a hospital so that she could have constant treatment which consisted of blood transfusions and cortisone shots. A student sent dozens of paper cranes to the patients in the children's ward of the hospital. Sadako decided she would make a thousand paper cranes because she remembered a story her mother told her about a child whose wish came true after making a thousand paper cranes. Of course, Sadako's wish was to live. And although she make more than a thousand cranes, she did not get her wish.

After her death, her classmates began a movement to raise funds to build a memorial dedicated to Sadako and all the children who were victims of the atomic bomb. The school children were successful and enough money was raised to create the memorial which contained a sculpture of a young girl who was looking skyward and holding a crane.