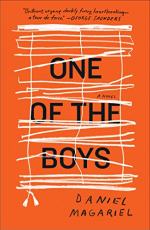 One of the Boys Quotes

I thought you were one of the boys.
-- The Father (chapter 1 paragraph 4)

Importance: This line from the father exemplifies one of the many ways in which he emotionally manipulates the narrator. The father offers the idea of being one of the boys as a state of being that the narrator should aspire to, and the only way he can achieve this status is by listening to and doing everything the father says. By holding it over the narrator's head like this, the father knows he can get the narrator to do whatever he wants because he knows the narrator only desires his approval and acceptance.

Importance: This line from the narrator when they enter the biker bar signifies the fact that he looks up to his father as a male role model. He gains confidence simply by being in proximity to his father, who he views as a strong and capable...

One of the Boys from BookRags. (c)2023 BookRags, Inc. All rights reserved.