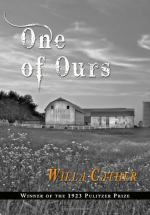 Plot Summary
+Chapters Summary and Analysis
Book 1: On Lovely Creek
Book 2: Enid
Book 3: Sunrise on the Prairie
Book 4: The Voyage on the Anchises
Book 5: Bidding the Eagles of the West Fly On
Free Quiz
Characters
Symbols and Symbolism
Settings
Themes and Motifs
Styles
Quotes
Order our One of Ours Study Guide

One of Ours Summary & Study Guide

Willa Cather
This Study Guide consists of approximately 48 pages of chapter summaries, quotes, character analysis, themes, and more - everything you need to sharpen your knowledge of One of Ours.

One of Ours Summary & Study Guide Description

One of Ours Summary & Study Guide includes comprehensive information and analysis to help you understand the book. This study guide contains the following sections:

This detailed literature summary also contains Quotes and a Free Quiz on One of Ours by Willa Cather.

The following version of this book was used to create this study guide: Cather, Willa. One of Ours. Seven Treasure Publications, 2009.

One of Ours takes place just before World War I in the town of Frankfort, Nebraska. Although the novel is narrated by an omniscient narrator, its plot centers on Claude Wheeler--a Nebraskan farmer--his journey toward fulfillment and his experience in the war. Cather's novel is divided into five books, each of which signals a new phase in Claude's life.

Book 1 of the novel, "On Lovely Creek," describes Claude's vexed relationship with his father, town, and his life as a farmer. Although Claude feels obliged to protect and defend his family, he longs for something more meaningful than a life of farming. At his parents' request, Claude studies history at a religious college, but he truly desires to study at the state university. During his time at college, Claude meets the Erlich family, who are imbued with intellectual liveliness. Claude admires the Erlichs, wishing to emulate them, and becomes more dissatisfied with his own family. Just as Claude and the Erlichs are growing close, Claude's father forces Claude to leave college in order to work on the farm full time.

Book 2 of the novel, "Enid," centers on Claude's life in Frankfort. Although Claude is fundamentally discontent working for his father, he finds new joy when he falls in love with Enid Royce. At first, Enid is hesitant to encourage Claude's advances, but after Claude suffers from a minor accident, Enid visits him everyday and the two get engaged. At the end of the book, Claude and Enid marry; on their wedding night, Enid refuses to consummate the marriage.

Book 3, "Sunrise on the Prairie," reveals that Claude's marriage is a disaster, for Enid is much colder to Claude than she was when they were courting. Enid receives word that her sister is ill in China, and leaves to take care of her, essentially ending the marriage. During this time, World War I begins, and by the end of the book, Claude decides to enlist. At the end of the book, he leaves for Europe.

Book 4, "The Voyage on the Anchises," describes Claude's journey to Europe on the Anchises. On the voyage, an epidemic of influenza breaks out, killing many men in Claude's company. Although Claude is surrounded by this dangerous illness and dying men, he personally feels excited to be participating in something great. By the time they land, Claude is eager to go to war.

Book 5, "Bidding the Eagles of the West Fly On," tells of Claude's experience in war. Claude quickly becomes a respected officer, befriending David Gerdhardt along the way. Although Gerdhardt and Claude have fundamentally opposing views of the war, the two become extremely close. In the novel's last moments, Gerdhardt and Claude are separated. Both die unaware that the other has died, and Claude is happy, believing his life has been worth living because of men like Gerdhardt. The novel's last chapter returns to Frankfort, showing Mrs. Wheeler and Mahailey dealing with the aftermath of Claude's death.

More summaries and resources for teaching or studying One of Ours.

One of Ours from BookRags. (c)2022 BookRags, Inc. All rights reserved.