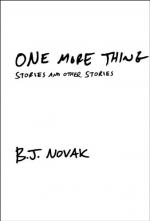 The first thing Tim did when he got to heaven was look for his wife.
-- Tim (No One Goes to Heaven to See Dan Fogelberg)

Importance: Tim has promised that he will see his grandmother in heaven, but from the beginning it is clear that this is not a priority.

Importance: John Grisham turned in the manuscript of his book without giving it a title, but the editor mistakenly published it with the space holder Grisham put on the manuscript.

And yet school sucks. Everybody hates it. What’s the difference? ‘Rithmetic!
-- Principal (Rithmetic)

Importance: The principal is explaining to his students why he thinks the school should no longer teach math.

I’m walking on eggshells,’ I said. ‘To impress you. Isn’t that your thing?
-- Female Narrator (Walking on Eggshells (or: When I Loved Tony Robbins))

Importance: The woman is trying to get Tony Robbins’ attention so she walks on eggshells. This becomes symbolic later when she realizes she will always be uncomfortable in his presence...