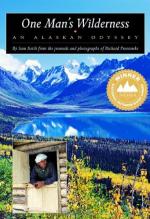 One Man's Wilderness: An Alaskan Odyssey Topics for Discussion

Sam Kieth
This Study Guide consists of approximately 33 pages of chapter summaries, quotes, character analysis, themes, and more - everything you need to sharpen your knowledge of One Man's Wilderness.

Identify, list and describe the steps Dick takes to prepare for his wilderness adventure.

Explain and discuss the significance of the bush pilot to the self-reliance of the Alaskan adventurer.

Identify, list, and describe at least five small animals and their habitat the Dick discovers around his cabin and homesite.

Identify, list, and describe at least five large animals and their habitat that Dick discovers while hiking, exploring or mountain-climbing.

Identify and describe the regular daily duties Dick follows, and why it is appropriate for his life in the wilderness.

Describe and discuss what Dick could do to survive if he is seriously injured or takes ill between the times that Babe is expected.

Describe and discuss what Dick could do if Babe does not show up when expected for an extended period, say one or two months

More summaries and resources for teaching or studying One Man's Wilderness: An Alaskan Odyssey.