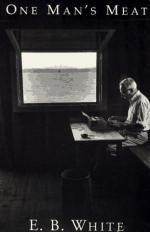 E. B. White
This Study Guide consists of approximately 26 pages of chapter summaries, quotes, character analysis, themes, and more - everything you need to sharpen your knowledge of One Man's Meat.

White's farm is located in the village of North Brooklin in Maine.

The state of Maine is located in New England and is the most northeastern point of the United States bordering on the Atlantic Ocean.

White reads some of the many children's books sent by publishers to his wife, Katherine, for review.

White raises chickens on his farm and dotes on the chicks just as if he were the mother hen.

White is isolated in his Maine village but keeps abreast of the film industry by reading Motion Picture magazine.

White raises sheep on his farm and becomes emotionally and physically involved with their grazing and birthing routines.

White looks forward to reading The Rural New Yorker each month even though he knows he should probably subscribe to the New England...

More summaries and resources for teaching or studying One Man's Meat.