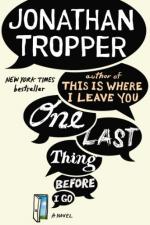 Silver, former drummer of the band Bent Daisies, is on his way to give a sperm sample for a clinical trial he and his friend Jack participate in for seventy-five dollars a week. Silver has been divorced for a little more than seven years, but a part of him continues to hope for a reunion despite his wife’s impending wedding in less than three weeks.

When Silver is done collecting his sample, he finds Jack flirting with the receptionist, something that makes Silver a little uncomfortable.

Silver goes to The Last Page, a local bookstore where a woman named Lily sings twice a week to the children. Silver likes to hide among the stacks and watch Lily. He has watched her for over a year, but he has yet to approach her.

Silver thinks of the first girl...

One Last Thing Before I Go from BookRags. (c)2023 BookRags, Inc. All rights reserved.