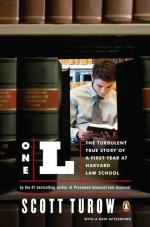 Scott Turow
This Study Guide consists of approximately 30 pages of chapter summaries, quotes, character analysis, themes, and more - everything you need to sharpen your knowledge of One L.

One L: The Turbulent True Story of a First Year at Harvard Law School Summary & Study Guide includes comprehensive information and analysis to help you understand the book. This study guide contains the following sections:

This detailed literature summary also contains Topics for Discussion on One L: The Turbulent True Story of a First Year at Harvard Law School by Scott Turow.

Each year 550 students begin at Harvard Law School and are divided into four sections. These students are designated as "One Ls" denoting their first-year status. The people in the sections attend the same classes as a group for the entire year, creating both friendships and educational alliances. Scott notes that most of the One Ls are younger than he, with just a sprinkling of women and black people.

Scott had been an instructor of Creative Writing in the English department at Stanford University in California for the past three years. Scott's fascination with the law prompts him to take the LSAT (Law School Admissions Test) in 1974 and his high scores and aptitude for the discipline make it clear that Scott has several options for law school. Scott chooses Harvard Law School for its reputation not only in the legal profession but also for its prominence in political and government channels.

Scott's wife, Annette, moves to Boston with Scott and finds a job teaching art at an elementary school. The couple's relationship is tested as Scott struggles with the grueling demands of study and class time. The couple has very little time together and looks forward to the breaks afforded by holidays for some rest and relaxation.

Scott plunges into his studies and finds that in spite of the exhausting schedule and study commitments, he is intellectually stimulated. Since there is little time for socializing, Scott's friends during his first year at Harvard become the men in his small study group. As the year progresses, Scott can see differences in the men's characters as the pressure to succeed and make exemplary exam grades increases.

As the year unfolds, Scott struggles with his own personal demons of jealousy and competitiveness and works hard to maintain a sense of personal ethics and integrity in a world where being number one is the preeminent goal.

The challenges of study and learning to love the law are both supported and complicated by an interesting array of professors whose varying styles teach Scott lessons not only in designated subject matters but also in the areas of human decency and diplomacy.

As the year ends, Scott hopes for changes for future One Ls that will include smaller classroom settings to improve student and faculty relationships; different formats for evaluating student performance; and making Law Review without regard to grades. Scott hopes for one thing overall and that is the removal of fear and humiliation from the law school experience, created by some professors who stringently believe in the Socratic method of instruction.

More summaries and resources for teaching or studying One L: The Turbulent True Story of a First Year at Harvard Law School.

One L: The Turbulent True Story of a First Year at Harvard Law School from BookRags. (c)2022 BookRags, Inc. All rights reserved.