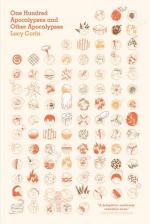 Lucy Corin
This Study Guide consists of approximately 59 pages of chapter summaries, quotes, character analysis, themes, and more - everything you need to sharpen your knowledge of One Hundred Apocalypses and Other Apocalypses.

The Road Home, in "Eyes of Dogs"

In "Eyes of Dogs," the soldier meets the witch who sends him on his journey as he travels home. The soldier thinks that "he might have made his mother into this [witch]," because of all the cruelties he saw and committed in war (10). In this way, the road home becomes the site of the soldier's own corruption. Instead of going home to find his mother, the soldier stops and listens to the witch, and thus begins his futile journey toward wealth.

In "Madmen," the madman gallery is where the narrator sees what her society defines as mad. The sign leading into the gallery reads, "An attachment to oneself is the first sign of madness," (27). This definition is subsequently subverted throughout the story: the narrator's mother, who is mad, has "endless empathy," demonstrating a non-attachment to herself (24). Thus, the madman...

More summaries and resources for teaching or studying One Hundred Apocalypses and Other Apocalypses.

One Hundred Apocalypses and Other Apocalypses from BookRags. (c)2022 BookRags, Inc. All rights reserved.