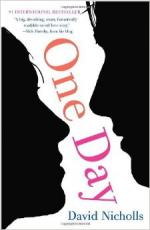 Get One Day from Amazon.com
View the Study Pack
Study Guide
Order our One Day Study Guide

David Nicholls (writer)
This Study Guide consists of approximately 20 pages of chapter summaries, quotes, character analysis, themes, and more - everything you need to sharpen your knowledge of One Day.

One Day Summary & Study Guide includes comprehensive information and analysis to help you understand the book. This study guide contains the following sections:

This detailed literature summary also contains Topics for Discussion on One Day by David Nicholls (writer).

"One Day" is a romantic novel by David Nicholls that spans the breadth of twenty years of the lives of Emma Morley and Dexter Mayhew.

Meeting in college, Dexter and Emma have a one-night stand in Edinburgh and spend the day after together. The evening has lasting implications for both of them, as each falls for the other, but neither one, for various reasons, is poised to commit to the other. For the next twenty years, their paths cross time and time again, between bad relationships, failed start-ups, heartache, loss, and joy. Emma and Dexter each have their ups and downs. Emma struggles with her self-confidence and having to dream a little smaller while Dexter faces internal demons in drugs and alcohol. Dexter even gets married and has a daughter, but the marriage is loveless.

Following Dexter's divorce, Dexter and Emma finally commit to a relationship in 2001 in Paris. They spend the next two years together happily. Dexter opens a cafe and gets his life back on track, while Emma comes into her own as a novelist and a screenwriter for a children's show. They move in together and get married. They also decide to have a baby. But tragedy strikes. While biking and heading out to meet Dexter at the house they want to look at to buy, Emma is struck by a car and killed.

The novel ends with Dexter reflecting on the first night and day that he and Emma spent together when he gives his phone number to Emma so that she will call him and stay in touch.

More summaries and resources for teaching or studying One Day.

One Day from BookRags. (c)2022 BookRags, Inc. All rights reserved.