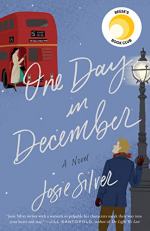 Josie Silver
This Study Guide consists of approximately 65 pages of chapter summaries, quotes, character analysis, themes, and more - everything you need to sharpen your knowledge of One Day in December.

On October 12, Laurie is with her family to celebrate her nephew's birthday. Oscar was there, but he left to go back to work as important negotiations are going on. He has reassured her that nothing is going on with his ex-girlfriend even though they now work together. She is glad that he is gone as she does not feel as if he and her family fit. When her mother has her take tea to her father, who is watching soccer, she finds that he has died.

On October 13, the doctor comes to give Laurie’s mother a sedative. Laurie and her bother discuss making funeral arrangements.

The perspective changes to Jack’s. He is sleeping. Amanda, his girlfriend, is there. The phone rings. He sees that it is Laurie, but he decides not to answer it. Later, while Amanda is still there...

More summaries and resources for teaching or studying One Day in December.

One Day in December from BookRags. (c)2022 BookRags, Inc. All rights reserved.