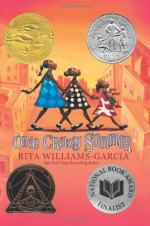 Rita Williams-Garcia
This Study Guide consists of approximately 41 pages of chapter summaries, quotes, character analysis, themes, and more - everything you need to sharpen your knowledge of One Crazy Summer.

Oakland is a major city in California near San Francisco. It is heavily-black, and is where Cecile moves to when she abandons her family in New York. Oakland comes to be a hotbed of countercultural activity, as the Black Panthers rise to prominence and seek to better the black community in Oakland by way of places like the People’s Center. Oakland also becomes the scene of much violence between the Black Panthers and the police, and is the showcase for rampant racism between blacks and whites.