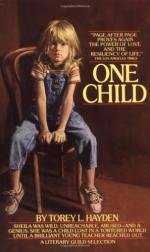 Get One Child from Amazon.com
View the Study Pack
View the Lesson Plans
Study Guide
Order our One Child Study Guide

Torey Hayden
This Study Guide consists of approximately 52 pages of chapter summaries, quotes, character analysis, themes, and more - everything you need to sharpen your knowledge of One Child.

One Child Summary & Study Guide includes comprehensive information and analysis to help you understand the book. This study guide contains the following sections:

This detailed literature summary also contains Topics for Discussion and a Free Quiz on One Child by Torey Hayden.

One Child is the story of a lost little girl and the extraordinary teacher who works to find her. Sheila has been forgotten by the system, her family, and society itself. She has been shuffled between relatives and institutions before landing in Torey Hayden's secluded annex classroom. Even the school does not pose the potential for a "home", since Sheila is only waiting to be transferred to the state hospital. Over the course of five months, Sheila transforms under Torey's care into a more self-assured and happy child, headed for the second grade instead of the state hospital.

Torey Hayden is a special education teacher who seems to have a special knack for working with the children who are unclassifiable. The children in Torey's class have disabilities that prevent them from being placed in the regular special education classrooms and so Torey teaches the "garbage class". Most of her students are severely below grade level for their age and several hold no real hope of advancing far academically. Sheila appears to be the worst case of the bunch. At six years old, she is being shuffled to Torey's room because she has just burned a three-year old after tying him to a tree. The story made the newspaper, and as Torey read it she felt an odd connection to the little girl. When Sheila first arrives in Torey's room she refuses to speak or to move. She brings a whole new level of chaos to a room that Torey has worked extremely hard to civilize. On her first day Sheila plucks the eyes out of all the goldfish. The other students are appalled by Sheila's behavior and spin out of control. From this point on each day will be a struggle of trying to break through Sheila's tough exterior.

Torey remains astonishingly patient as she continues to work with Sheila. Torey does not place demands on Sheila and allows the little girl time to become comfortable in her new surroundings. Torey works first on getting Sheila to sit with the group, then to work on a few basic academic tasks, and then on her hygiene. No matter what Sheila does, Torey remains consistent and calm. Ever so slowly, Sheila begins to open up. Torey is surprised to learn that the little girl is brilliant and functions on the level of a fifth grader. Sheila delights in having her hair brushed and made pretty with clips. Sheila even begins to make friends with several other students.

Torey also learns more about Sheila's personal life. One day Sheila comes to school with blood all over the front of her. Sheila tells Torey that her Uncle Jerry cut her vagina with a knife while molesting her. Torey takes Sheila to the hospital for treatment. While Sheila heals physically, Torey is worried that the little girl still needs emotional counseling. Sheila continues to grow under Torey's care. By the end of the year, Sheila is no longer headed for the state hospital. Instead, she is taking part in a class play, and is cautiously eager to move on to the second grade. Torey too has grown. She loves working with special needs children and has decided to pursue more education in order to increase her potential to help disabled students. Torey is nervous about moving on and leaving the school behind but she feels ready.

Torey and Sheila travel a unique road together. Both of them learn a great deal and develop strengths they did not know they possessed. Torey Hayden tells their story in a simple yet warm style that draws one in and makes one part of the relationship.

More summaries and resources for teaching or studying One Child.

One Child from BookRags. (c)2022 BookRags, Inc. All rights reserved.