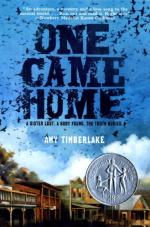 Amy Timberlake tells her novel “One Came Home” from the first-person, omniscient point of view of Georgie Burkhardt, the principal protagonist. It seems that Georgie is relating her personal story to a close friend as she addresses the reader as "you" at various places. Since Georgie is making a personal decision as a young woman to tell her experiences, the first-person narrative point of view supports one of the he novel's themes about feminism.

“One Came Home” by Amy Timberlake is written in language that is historically accurate. The language which the author chooses keeps in line with the 13 year-old main character Georgie's level of education. For example, Georgie uses words such as firmament, beleaguer, infinitesimally, etc. in her casual conversation. Therefore, some of the vernacular that was common by mid-nineteenth century standards might be obscure to the novel's targeted young adult...