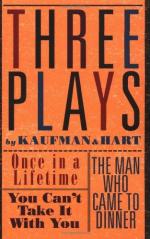 Books Like Once in a Lifetime by Moss Hart | Suggested Reading

Moss Hart
This Study Guide consists of approximately 47 pages of chapter summaries, quotes, character analysis, themes, and more - everything you need to sharpen your knowledge of Once in a Lifetime.

Merton of the Movies, a play written by Kaufman and Marc Connelly in 1922, also concerns the absurdities of life in Hollywood. It was one of the inspirations for Once in a Lifetime.

Speed the Plow, a play written by David Mamet in 1988, also concerns the inner-workings of Hollywood. The story focuses on two film industry insiders, and the maneuverings of a woman to break in.

Which Lie Did I Tell?, a memoir by WilliamGoldman published in 2000. The book recounts Goldman's life as a Hollywood screenwriter at the end of the twentieth century.

Merrily We Roll Along, a play written by Hart and Kaufman in 1934, focuses on the pitfalls of success.

The Last Tycoon, an unfinished novel by F. Scott Fitzgerald published posthumously in 1941. The novel is based on Fitzgerald's frustrating experiences as a Hollywood screenwriter.

More summaries and resources for teaching or studying Once in a Lifetime.

Once in a Lifetime from Gale. ©2005-2006 Thomson Gale, a part of the Thomson Corporation. All rights reserved.