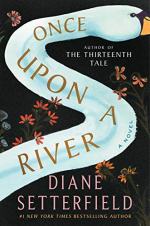 Plot Summary
+Chapters Summary and Analysis
The Story Begins… – The Story Travels
Tributaries – A Well-Practiced Tale
Lily’s Nightmare – Three Claims
The Sleeper Wakes – Is It Finished?
Things Don’t Add Up – The Story Flourishes
Coming – Gone! Or, Mr. Armstrong Goes to Bampton
Some Stories Are Not for Telling – The Longest Day
Philosophy at the Swan – Thruppence
Retelling the Story – The Dragons of Cricklade
The Wishing Well – Of Sisters and Piglets
The Other Side of the River – Fathers and Sons
Lily and the River – Happily Ever After
Free Quiz
Characters
Symbols and Symbolism
Settings
Themes and Motifs
Styles
Quotes
Order our Once Upon a River Study Guide

Once Upon a River Summary & Study Guide

Diane Setterfield
This Study Guide consists of approximately 77 pages of chapter summaries, quotes, character analysis, themes, and more - everything you need to sharpen your knowledge of Once Upon a River.

Once Upon a River Summary & Study Guide Description

Once Upon a River Summary & Study Guide includes comprehensive information and analysis to help you understand the book. This study guide contains the following sections:

This detailed literature summary also contains Quotes and a Free Quiz on Once Upon a River by Diane Setterfield.

The following version of this book was used to create the guide: Setterfield, Diane. Once Upon a River. Emily Bestler Books/Atria Books, 2018.

Part 1 of the novel began with the backstory of one of the oldest inns on the Thames, the Swan Inn, that specifically drew storytellers. On the night of the winter solstice, a man with a facial wound entered the Swan carrying a young girl, who was considered dead. The people at the Swan called for Rita to care for the man. She requested to see the girl, and although she could not detect a pulse, she could not determine a cause of death. Eventually, Rita detected an abnormally slow pulse. By emptying the man’s pockets, Margot determined he was Henry Daunt, a photographer. Rita reentered the Swan with the living child in her arms. Afterward, the story spread from the Swan.

Robert and Bessie Armstrong were introduced at their farm in Kelmscott. Bess found a destroyed letter in her son, Robin’s, jacket pocket and consulted Armstrong. Armstrong later confided in his pigs and wondered about the pig who was stolen from him. Helena Vaughan was introduced laying in a rowboat on the Thames. She remembered her childhood and the story her aunt told her about the river goblins that stole children to the bottom of the river. She was saved by an indistinct figure just before she tipped into the water. Mr. Vaughan visited Mrs. Constantine to seek help for their grief about the kidnapping of their daughter Amelia two years prior. Mrs. Constantine declined to lie to Helena, but she offered help in the future.

Lily White was introduced living in the Basketman’s Cottage. When she fell asleep, she had a nightmare of a young girl dripping with river water, hovering and pointing angrily at her. Armstrong traveled to Bampton to determine whether Robin’s wife and daughter still lived there. A butcher’s son, Ben, escorted him to the brothel where Armstrong found Robin’s wife dead. He learned about the girl at the Swan shortly after. Lily barged into the Swan the morning after the solstice and begged the girl, whom she called Ann, for forgiveness before running out. Armstrong then arrived to see the girl but was unsure of her connection to his family. Mr. Vaughan heard about the girl from his gardener, and when he arrived there, he found Helena smiling with the girl she believed to be Amelia.

Henry Daunt awakened and confirmed that the child was not his. When Robin Armstrong saw the girl, he seemed distraught that she was not Alice and fainted. Daunt told Rita he remembered hitting his head at Devil’s Weir and finding the girl in the river. Rita told him the story of the ferryman known as Quietly, the ghostly keeper of the Thames. The Vaughans left the Swan with the child.

Part 2 began with Lily caring for the pigs outside her cottage. The parson tried to reason that the girl was too young to be her sister, but she could not be dissuaded. Meanwhile, the Vaughans invited Rita to examine the girl weekly. On her walk home, Rita was assaulted by a stranger who wanted to know if the girl could speak. Vaughan was unconvinced this girl was Amelia but met with a lawyer to plan for a potential custody battle with Robin. The Vaughans decided to compare their photos of Amelia, taken by Daunt, to the girl in their possession.

The Swan was busy with patrons interested in the story of the girl. Daunt bought a boat to photograph the Thames and visited Rita to thank her. He helped her with a medical experiment and she allowed him to photograph her. Lily was visited by Vincent, who used her for money, food, and trading illegal liquor. Armstrong returned to Bampton to retrieve a witness who knew Alice but failed. He traveled to Oxford and found Robin hostile and violent. Years prior, Armstrong fell in love with the disabled Bess while working on her father’s farm and asked for her hand regardless of her unborn child conceived through rape. While Rita and Daunt were present to photograph the girl at the Vaughans, Rita spotted Lily watching from the vegetation, who later confessed to the parson.

Part 3 began with a wedding and a fair on the summer solstice. At the fair, Vaughan was blackmailed by a fake fortune teller who threatened to tell Helena the child was not Amelia. Robin’s wife’s ex-boss called the girl Alice, and Robin appeared. Helena was distraught, and when Rita visited her, she determined Helena was pregnant. Lily remembered the day she met her stepfather and stepbrother Victor. Victor returned to the cottage to beat and rape Lily. The girl was living with the Armstrongs, and Armstrong believed he bought a picture at the fair of his stolen pig.

Rita, Daunt, Margot and her family, Ruby, and others created a lantern show at the Swan and projected staged photographs reenacting Amelia’s kidnapping to elicit information from the community. Lily was particularly affected, and after Rita and Armstrong visited her cabin, he discovered his stolen pig there. They went to the parsonage and Lily confessed that she believed she accidentally drowned Ann and that Victor brought Armstrong’s pig to her. Vaughan, Daunt, Armstrong and other men tried to find Victor on Brandy Island, but he escaped into the Thames. The parson assured Lily that Victor only convinced her she drowned her sister, who actually died of illness.

Part 5 began with Armstrong discovering that Robin had threatened his sister Susan for money with Armstrong's slaughtering knife. The river was flooding, and the Vaughans realized the girl was missing. As they searched, Helena went into labor. Daunt took them to Rita, who was caring for Joe at the Swan as he died. After Joe died, Helena gave birth to a son still encased in his amniotic sac. Armstrong found Robin in the trees, and Robin insisted he be given money to save his life. They argued about his lineage until Victor emerged declaring he was Robin's father. Victor revealed that Robin was involved with Amelia’s kidnapping and murder. Victor threatened to expose Robin if he did not join him in life and business, so Robin slashed him with the slaughtering knife. As Victor fell into the river, he pulled Robin with him, killing him, too.

Jonathan claimed he saw the girl on Quietly’s punt when he collected Joe. Lily entered the Swan holding a piglet in her arms she saved from the river. Armstrong thought he also saw the girl on the punt that pulled Robin and Victor’s bodies from the river. Ben brought Alice to the Armstrong's farm that night having saved her from a London orphanage. Ruby married, Alice flourished with the Armstrongs, Lily moved into the parsonage, the Vaughans moved to New Zealand, and Rita carried her and Daunt’s unborn child. The novel ended with the claim that endangered people no longer saw Quietly on the punt, rather it was the girl, his daughter, who came to their aid.

More summaries and resources for teaching or studying Once Upon a River.

Once Upon a River from BookRags. (c)2022 BookRags, Inc. All rights reserved.