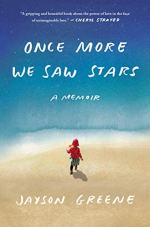 Jayson Greene
This Study Guide consists of approximately 58 pages of chapter summaries, quotes, character analysis, themes, and more - everything you need to sharpen your knowledge of Once More We Saw Stars.

Once More We Saw Stars Summary & Study Guide includes comprehensive information and analysis to help you understand the book. This study guide contains the following sections:

This detailed literature summary also contains Topics for Discussion on Once More We Saw Stars by Jayson Greene.

The following version of this book was used to create this guide: Greene, Jayson. Once More We Saw Stars. Knopf, 2019. First edition.

One afternoon on the Upper West Side of Manhattan, two-year-old Greta Greene sits on a bench with her grandmother, Susan, when a brick crumbles from a windowsill eight stories above, falling to earth and striking Greta on the head. While being rushed to the emergency room, Susan calls her daughter, Stacy, and her husband, Jayson Greene, Greta’s father and the first person narrator of Once More We Saw Stars.

Jayson and Stacy arrive at the emergency room to find a large team of physicians tending to their daughter. While they wait, friends and family arrive and offer comfort and support. Soon the prognosis is clear: while Greta is functionally alive, she is brain dead, and her prognosis is fatal.

Jayson and Stacy, utterly shocked and saddened, elect to donate Greta’s organs before she is removed from life support. This burdensome bureaucratic process takes over 24 hours to complete, during which time they wait, gauging the depths of their grief in a series of hospital waiting rooms. Eventually, Greta is removed from life support and the couple finds themselves navigating a foreign, unfamiliar world without their daughter. Their family coalesces around them and offers a strong network of support; Greene writes that he no longer has a grasp on time or space, that the violent and sudden loss of his daughter has shocked and saddened him to his core.

They hold a memorial for Greta at a Quaker school; friends and family share memories of Greta, and Greene finds himself buoyed by the expressions of love and by the vaguely religious tradition, despite growing up without a strong sense of faith. Eventually, their friends and family return to their normal lives, and Stacy and Jayson attempt to do the same. They return to work while struggling with grief, loneliness and anger. One day while running in the park, Greene feels Greta’s presence, and resolves to live a more spiritual life, in an effort to be receptive to what he perceives as his daughter’s lingering spirit.

In an effort to move beyond their profound grief, Jayson and Stacy spend a weekend at the Kripalu Institute, in Stockbridge, Massachusetts, where they perform healing exercises with David Kessler, a grief expert, and encounter a medium, Maureen Hancock, who they sincerely believe can commune with the dead. The weekend affirms their sense that Greta’s spirit still exists in some meaningful sense.

Shortly after returning from Kripalu, Jayson and Stacy decide they need to leave the old apartment where they had raised Greta. The decision to move sets off a long period of nomadic restlessness, sleeping on friends couches and in short term rental units, during which time they have only limited, fraught contact with their families. Eventually the couple finds a suitable two-bedroom in Brooklyn. Just before they do, they also learn that Stacy is pregnant.

The couple resolves to work more deliberately through their emotions surrounding Greta’s loss after the news of Stacy's pregnancy. They attend a local grief group once, but find the experience unsatisfactory. About 10 months after Greta’s death, Jayson and Stacy fly to New Mexico to visit the Golden Willow Retreat, a center for people in deep grief. Over the course of a couple of days, a man named Jim leads them through a tobacco tying ceremony and leads them on a spirit journey, during which Jayson recounts vivid hallucinations of Greta and senses her presence imbued in the earth.

After recounting the sprit vision, Greene jumps ahead to the moments before their son’s birth, in the last days of his long gestation. Their new son, whom they name Harrison, is a healthy, hirsute and grinning boy who brings his parents and grandmother immense joy. In the final pages of the book, Greene addresses both his children, instructing them to take his hands and walk with him into the future.

More summaries and resources for teaching or studying Once More We Saw Stars.

Once More We Saw Stars from BookRags. (c)2022 BookRags, Inc. All rights reserved.