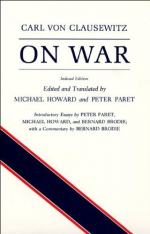 Get On War from Amazon.com
View the Study Pack
View the Lesson Plans
Study Guide
Order our On War Study Guide

Carl von Clausewitz
This Study Guide consists of approximately 25 pages of chapter summaries, quotes, character analysis, themes, and more - everything you need to sharpen your knowledge of On War.

On War Summary & Study Guide includes comprehensive information and analysis to help you understand the book. This study guide contains the following sections:

This detailed literature summary also contains Topics for Discussion and a Free Quiz on On War by Carl von Clausewitz.

On War (Vom Kriege) is one of the great works of military strategy and theory in history, standing among such great works as The Art of War. On War was written by the Prussian general Carl von Clausewitz following the Napoleonic Wars. Clausewitz had been stunned by how totally Napoleon had dominated Europe and how he had appeared to change the nature of modern warfare, creating a larger scale war than Europe had arguably ever seen. Thus, one purpose of On War is to break war down into its constituent elements so that a comprehensive theory of war can be developed.

Clausewitz wrote during the age of the great imperial Nation-States in the West, prior to widespread democratic government and following the medieval period. Thus On War concerns military conflicts between states. It does not speak to the conflicts of civil wars, rebellion, secession or terrorism. Clausewitz focuses on the classical issues of field combat, army formation, the relationship between battles and wars, the character of military leaders and troops and so on.

On War contains several crucial ideas. From the outset, Clausewitz emphasizes the contrast between the physical and moral aspects of war. The physical aspects are all those elements that are comprised of matter. The moral aspects of war concern the attitudes, character traits and spirit of all human beings involved in a conflict, leaders, soldiers and the state. This distinction is vital for Clausewitz because he argues that moral forces have been ignored by military theorists when they often matter far more than physical forces. Clausewitz therefore focuses on moral forces in great detail, such as the concept of 'boldness' which is more appropriate for soldiers than generals, and the idea of military 'genius' which is required only of commanders.

Clausewitz is well-known for arguing that war is not an end in itself but an extension of politics to open violence as an attempt to force one's will upon the opponent. The reason for this can be understood in light of Clausewitz's emphasis on the moral. For the physical is in the service of the intentional aims and energy of peoples, leaders and armies. If one side can break the will of the other, it can quickly win any war. Despite this, physical force will eventually overwhelm any moral power at a large enough magnitude. Strength of numbers, for instance, can overwhelm any other feature of war in importance if the disproportion between two sides is large enough.

This study guide covers Volume I of Vom Kriege, which contains Books I-IV (there are eight altogether). Book I, On the Nature of War, is the most theoretical, laying out major definitions, technical terms and theoretical concepts. Book II, On the Theory of War, explains how to theorize about war. Book III, Of Strategy In General, explains the idea of strategy, that is, the aim of war as a whole. Book IV, The Combat, explains the structure of the battle, that is, the concrete events that compose a war and that are the key elements of strategy.

More summaries and resources for teaching or studying On War.

On War from BookRags. (c)2022 BookRags, Inc. All rights reserved.