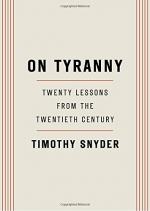 On Tyranny: Twenty Lessons From the Twentieth Century Quotes

In founding a democratic republic upon law and establishing a system of checks and balances, the Founding Fathers sought to avoid the evil that they, like the ancient philosophers, called tyranny. They had in mind the usurpation of power by a single individual or group, or the circumvention of law by rulers for their own benefit. Much of the succeeding political debate in the United States has concerned the problem of tyranny within American society: over slaves and women, for example.
-- Timothy Snyder (Prologue paragraph 1)

Importance: This quote demonstrates the role that the fear of tyranny has played in American history and provides historical context to this book.

The European history of the twentieth century shows us that societies can break, democracies can fall, ethics can collapse, and ordinary men can find themselves standing over death pits with guns in their hands. It would serve us well today to understand why.
-- Timothy Snyder (Prologue paragraph 1)

On Tyranny: Twenty Lessons From the Twentieth Century from BookRags. (c)2023 BookRags, Inc. All rights reserved.