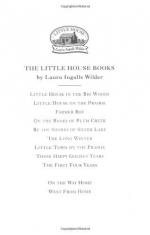 On the Way Home: The Diary of a Trip from South Dakota to Mansfield, Missouri, in 1894 Summary & Study Guide

Laura Ingalls Wilder
This Study Guide consists of approximately 29 pages of chapter summaries, quotes, character analysis, themes, and more - everything you need to sharpen your knowledge of On the Way Home.

On the Way Home: The Diary of a Trip from South Dakota to Mansfield, Missouri, in 1894 Summary & Study Guide Description

On the Way Home: The Diary of a Trip from South Dakota to Mansfield, Missouri, in 1894 Summary & Study Guide includes comprehensive information and analysis to help you understand the book. This study guide contains the following sections:

This detailed literature summary also contains Topics for Discussion and a Free Quiz on On the Way Home: The Diary of a Trip from South Dakota to Mansfield, Missouri, in 1894 by Laura Ingalls Wilder.

The book is a composite of two authors, Rose Wilder Lane and Laura Ingalls Wilder, a daughter-and-mother pair. The introductory chapter, by Rose Wilder Lane, establishes a setting in De Smet, South Dakota, and introduces the remainder of the book. The second chapter, by Laura Ingalls Wilder, is a day-by-day journal discussing events on a family relocation trip from De Smet to Mansfield, Missouri, during the summer of 1894. The third and final chapter, by Rose Wilder Lane, picks up the narrative where the journal leaves off and attempts to complete, or at least to round off, the journey. The voice and tone of Chapters 1 and 3 are similar while that of Chapter 2 varies. This is in part due to a different author, but is also due to the different method of construction, the bracketing chapters being narrative while the middle chapter is a reproduction of a journal.

The Wilder family, comprised of Laura, her daughter Rose, and her husband Almanzo, has encountered difficult economic times due to a combination of a national economic panic, a prolonged regional drought, and a bout of serious illness. Although Wilder's parents and aunts live in De Smet, Almanzo determines that the area is unsuitable for a long-term attempt at financial rehabilitation. Lured by photographs and letters telling of bounteous crops, the Wilders determine to relocate to Mansfield, Missouri—a place they refer to as the Land of the Big Red Apple. The family makes the voyage in companionship with another small group, the Cooley family. They set out with sufficient time to make the journey, relocate, and get established before winter arrives.

The journey itself is largely unremarkable. The group averages about sixteen miles of travel each day, spends Sundays resting, and passes through generally settled areas. There are a few minor mishaps with horses or wagon wheels, but nothing exceptionally difficult. Wilder keeps a daily journal in a small notebook and the entries are fairly short and generally consist of observations more than introspection. Throughout the trip Wilder notes crop conditions, water availability, the weather and temperature, the type and character of towns and residents, and the price of land and food. Little attention is paid to narrative structure or continuity, as would be expected in a journal.

Upon arriving in Mansfield Wilder discontinued her journal, but Lane picks up the narrative and relates how a suitable property was located and purchased. Subsequent homesteading activities followed to clear land, build structures, and establish a farm. Obviously backbreaking, the work continued without serious incident until the family indeed became established in a long-term locale. Thus, the entire adventure is highly interesting, very accessible, but largely unexceptional.

More summaries and resources for teaching or studying On the Way Home: The Diary of a Trip from South Dakota to Mansfield, Missouri, in 1894.

On the Way Home: The Diary of a Trip from South Dakota to Mansfield, Missouri, in 1894 from BookRags. (c)2022 BookRags, Inc. All rights reserved.