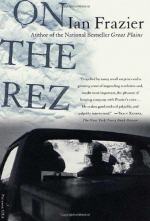 On the Rez Quotes

Ian Frazier
This Study Guide consists of approximately 46 pages of chapter summaries, quotes, character analysis, themes, and more - everything you need to sharpen your knowledge of On the Rez.

That self-possessed sense of freedom is closer to what I want; I want to be an uncaught Indian like them.
-- Narrator/Ian Frazier (Chapter 1 paragraph 4)

Importance: This quote explains Frazier’s affinity to the Indians as well as emphasizing the impact their sense of freedom had on the founding of America.

But such accounts can't do justice to the thrilling spark of freedom in the encounter - the freedom the Indians had, the freedom that white people found. As surely as Indians gave the world corn and tobacco and potatoes, they gave it a revolutionary new idea of what a human being could be.
-- Narrator/Ian Frazier (Chapter 1 paragraph 19)

Importance: This quote describes the impact that the Indians’ culture had on the European emigrants who settled in America and founded this country.

You ask me to be a Lakota, And that is the hardest thing in the world to be. I am a Lakota, So I suffer for my people.
-- Le (Chapter 2 paragraph 16)

More summaries and resources for teaching or studying On the Rez.

On the Rez from BookRags. (c)2020 BookRags, Inc. All rights reserved.