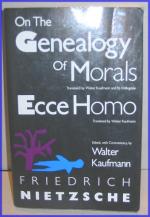 Plot Summary
+Chapters Summary and Analysis
Note
Preface
Essay I, Good and Evil, Good and Bad
Essay II, Guilt, Bad Conscience, and The Like
Essay III, What is the Meaning of Ascetic Ideals?
Characters
Objects/Places
Themes
Style
Quotes
Topics for Discussion
Order our On the Genealogy of Morals Study Guide

On the Genealogy of Morals Setting & Symbolism

Friedrich Nietzsche
This Study Guide consists of approximately 32 pages of chapter summaries, quotes, character analysis, themes, and more - everything you need to sharpen your knowledge of On the Genealogy of Morals.

The University of Basel

The University of Basel is the university at which Friedrich Nietzsche is a professor of philosophy in 1873. During his time there he meets and forms a friendship with Paul Ree, a doctoral candidate in philosophy.

The Franco-Prussian War is fought in 1870. This is one of the experiences that Friedrich Nietzsche and Paul Ree share in common. Nietzsche serves in the war as a medical orderly, while Ree serves as a soldier.

Tautenberg is the location of Nietzsche and Lou Salome's vacation. They spend three weeks there together with Nietzsche's sister Elizabeth as a chaperon. Friedrich falls madly in love with Salome here and later proposes marriage to her through Paul Ree.

Sorrento is the location where Nietzsche records a collection of aphorisms in the winter of 1876-77 that he recalls thinking about much earlier but does not develop. These...

More summaries and resources for teaching or studying On the Genealogy of Morals.

On the Genealogy of Morals from BookRags. (c)2023 BookRags, Inc. All rights reserved.