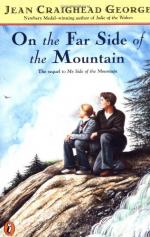 On the Far Side of the Mountain Summary & Study Guide

Jean Craighead George
This Study Guide consists of approximately 39 pages of chapter summaries, quotes, character analysis, themes, and more - everything you need to sharpen your knowledge of On the Far Side of the Mountain.

On the Far Side of the Mountain Summary & Study Guide Description

On the Far Side of the Mountain Summary & Study Guide includes comprehensive information and analysis to help you understand the book. This study guide contains the following sections:

This detailed literature summary also contains Quotes and a Free Quiz on On the Far Side of the Mountain by Jean Craighead George.

“On the Far Side of the Mountain” is a young adult novel by Jean Craighead George. It is the sequel to her novel “My Side of the Mountain”, and is a prequel to “Frightful’s Mountain”. “On the Far Side of the Mountain” picks up approximately one year after “My Side of the Mountain” left off. Sam Gribley, now about thirteen or fourteen, lives on Bitter Mountain above the town of Delhi, New York, in the Catskill Mountains, with his sister, Alice, and his pet peregrine falcon, Frightful. Alice and the rest of the Gribley family, arriving one year after Sam on the mountain, left three weeks later, unable to make a go of it. Alice stays behind and lives with Sam for the next year, at which time “On The Far Side of the Mountain” opens. Sam is continuing to live off the land with his falcon, Frightful, providing meals for his sister, Alice, and making friends with everyone on the mountain, from Bando and his wife, Zella, to Mrs. Fielder, also known as Mrs. Strawberry for her love of strawberries. When the novel begins, Sam is faced with two major problems. A conservation officer, Leon Longbridge, arrives to take away Frightful, saying it is illegal to harbor an endangered species. Sam is heartbroken. At the same time, he discovers that Alice has run away.

With Bando’s help, Sam seeks clues as to where Alice may have gone. She leaves behind various clues, such as compasses and sundials, so that Sam and Bando may figure out where she went. The journey leads them far away from Bitter Mountain, all the way out of the Catskill Mountains, and into the Helderberg Mountains. There, Sam meets and befriends a pretty girl named Hanni, who is friends with Alice. Hanni is apparently in on what Alice is doing, but will not tell Sam what is going on. Sam and Bando continue on into the Helderbergs, exploring caves, streams, and waterfalls as they go, believing that Alice’s final destination must be the Heldersberg Escarpment, a great cliff with a beautiful view and waterfall.

As Sam and Bando arrive in Rensselaerville near the Escarpment, they not only close in on Alice’s trail, but discover a falcon poaching scheme. Sam recognizes the conservation agent, Leon Longbridge, whom Bando says is an impostor, for he knows the real Leon Longbridge. Sam has the local conservation officer, Sean Conklin, contacted, and he and Bando watch as Conklin arrests the Longbridge impostor, his associate, and the Arab to whom they are attempting to sell a falcon for $50,000. Sam later finds Alice at the escarpment, who has captured a baby goshawk for Sam. Sam tells her they must let the hawk go, for it is against the law to keep it. Alice is saddened, wanting Sam to have a pet falcon, but understands. It is then that they see Frightful flying in the sky. Alice explains she came upon the birds kidnapped by the poachers, not realizing what was going on at the time, and freed Frightful. Sam wants to call Frightful back, but then refuses to do so, knowing she must be free in the wild to live among her own kind.

More summaries and resources for teaching or studying On the Far Side of the Mountain.

On the Far Side of the Mountain from BookRags. (c)2022 BookRags, Inc. All rights reserved.