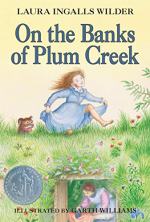 On the Banks of Plum Creek Summary & Study Guide

Laura Ingalls Wilder
This Study Guide consists of approximately 40 pages of chapter summaries, quotes, character analysis, themes, and more - everything you need to sharpen your knowledge of On the Banks of Plum Creek.

On the Banks of Plum Creek Summary & Study Guide Description

On the Banks of Plum Creek Summary & Study Guide includes comprehensive information and analysis to help you understand the book. This study guide contains the following sections:

This detailed literature summary also contains Quotes and a Free Quiz on On the Banks of Plum Creek by Laura Ingalls Wilder.

“On the Banks of Plum Creek” is a young adult semi-autobiographical novel by Laura Ingalls Wilder, and is part of her “Little House on the Prairie” series. It details the life and experiences of young Laura Ingalls between the ages of seven and eight while living along Plum Creek in Minnesota. As the novel begins, Charles (Pa) and his wife, Caroline (Ma), have just arrived along Plum Creek with their three daughters, Mary, Laura, and Carrie, and a few animals including their dog Jack. Pa trades his wagon and horse team to Mr. and Mrs. Hanson for their house and property. The Hansons are headed West.

The Hanson house is built straight into one of the banks of Plum Creek. It is a small but sturdy house. Laura and Mary are especially excited to be living near a beautiful creek, while Ma is thankful that the journey from Wisconsin is over. Immediately, the family sets to work making improvements. The family also becomes acquainted with their neighbors, the Nelsons, for whom Pa helps to work the land in exchange for goods and animals such as Spot the cow. The summer is long and dry, which is perfect grasshopper weather according to the Nelsons. None of the Ingalls have any idea what this means.

Through the winter, Pa purchases two horses, who will provide good labor and transportation for the family into the nearby town of Plum Creek. As the spring comes on, Pa and Mr. Nelson construct a new house for the Ingalls family, including an attic bedroom and two rooms downstairs. Laura, Mary, Ma, and Carrie are thrilled to be moving into an above-ground house with not only more than one room, but with more than one floor. Ma likewise is thrilled to have a cookstove and oven in the house, an item which she considers to be a luxury of the highest kind.

Spring planting goes very well, and the summer goes by beautifully. The family attends church weekly. In the autumn, Laura and Mary are sent into town to attend school. There, Laura is bullied by wealthy Nellie Oleson, whose father runs a general store. Nellie meanly refers to Laura and Mary as “country girls”. However, Laura and Mary become fast friends with Christy Kennedy, who introduces them to other friends as well.

Things go very wrong in the autumn, however. The grasshopper weather Mr. Nelson spoke about is a foretelling of events to come. Millions and millions of grasshoppers descend on the area, destroying the landscape and ruining the crops of countless homesteaders. Pa decides to head east a few hundred miles, beyond the reach of the grasshoppers. There, he takes on work harvesting crops and sending home money. By the spring, millions of baby grasshoppers have hatched, making planting impossible. By the end of the summer, the grasshoppers leave and go west.

Pa must again move east to take on work in the autumn to support his family. He returns to an early, brutal winter. Blizzard after blizzard bears down on the countryside through December. While heading back from town one day, another blizzard sets in. Pa must take refuge under an embankment along the creek. Ma, Mary, Laura, and Carrie are beside themselves with worry and fear for Pa, and are relieved to see him come home safely a few days later, just in time for Christmas. Though there are no material gifts, the family knows that Pa’s survival is the best gift possible.

More summaries and resources for teaching or studying On the Banks of Plum Creek.

On the Banks of Plum Creek from BookRags. (c)2022 BookRags, Inc. All rights reserved.