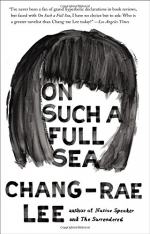 On Such a Full Sea Summary & Study Guide

On Such a Full Sea Summary & Study Guide Description

On Such a Full Sea Summary & Study Guide includes comprehensive information and analysis to help you understand the book. This study guide contains the following sections:

This detailed literature summary also contains Quotes and a Free Quiz on On Such a Full Sea by Chang-Rae Lee.

On Such a Full Sea follows the adventures of Fan, a young woman who is often mistaken for a child. She leaves of the confines of her sheltered home in B-Mor, a region formally known as Baltimore with the hope of finding her boyfriend, and father of her unborn child, Reg, who happens to be free of any genetic markers for C-illness.

It is an indeterminate amount of time into the future, and life is quite different. The world is divided into three different classes: B-Mor, Charters, and Counties. Fan makes her way through these different areas with the help of people she meets along the way. When Fan injures her leg, she is taken in by a former veterinarian named Quig. Fan distrusts the people she meets at Quig’s, but befriends a young boy named Sewey. Sewey is sick and in need of medication. Quig and Sewey’s mother Loreen take Fan to one of the Charters to get medication for Sewey, although she does not know where they’re going or why.

Quig bonds with Fan while teaching her how to drive. Quig tells Fan about how his wife and daughter were killed before he started the settlement where he lives. They are in a car accident in the county and a county family helps them and offers them food and shelter for the night. When the county family decides they want Fan to stay with them, the drug and tie up Quig and Loreen. Fan rescues them and they hurry out of the county.

When they reach the Charter, Fan meets Mister Leo and Miss Cathy, a well-to-do couple who negotiate with Quig for the needed medicine. Part of the exchange involves them giving Fan to the couple, presumably as a servant. On her first night in the house, Mister Leo rapes Fan and Miss Cathy catches him, striking him in the head and leaving him with brain damage. Miss Cathy keeps Fan at the house and includes her in with the group of Girls that she keeps in her chambers.

The Girls help Fan to escape, although at great risk to their health. Two of the girls willingly contract botulism in order to cause a scene in which Fan can leave. Fan leaves with Vik, the doctor who comes to treat the girls. Vik allows Fan to stay with him. He takes her to a housewarming party and is introduced to Oliver and Betty. Vik is having an affair with Betty and Oliver is one of his oldest friends. Vik and Betty get into an argument and Vik ends up leaving Fan with Betty and Oliver. Oliver reveals that he is Fan’s older brother who was offered a place in a Charter after testing out of B-Mor.

Oliver is a very successful medical researcher who has developed a drug that shows promise in curing C-illness. Fan tells him about Reg’s C-free status. Oliver presumably locates Reg, who is in custody of a pharmaceutical company. When Oliver discovers that Fan is pregnant with Reg’s child, he takes advantage and agrees to sell Fan to the pharmaceutical company. Betty figures out the plan and arranges for Fan to escape with the aid of Vik.

On Such a Full Sea from BookRags. (c)2022 BookRags, Inc. All rights reserved.