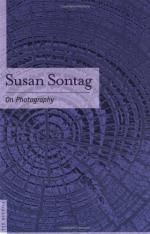 Susan Sontag
This Study Guide consists of approximately 30 pages of chapter summaries, quotes, character analysis, themes, and more - everything you need to sharpen your knowledge of On Photography.

On Photography Summary & Study Guide includes comprehensive information and analysis to help you understand the book. This study guide contains the following sections:

This detailed literature summary also contains Topics for Discussion and a Free Quiz on On Photography by Susan Sontag.

Susan Sontag's 1977 monograph On Photography is composed of six named chapters, or essays, which form a weakly related progression from conceptualization through history and implementation, to the then-current understanding of photography as a process and an art form. Sontag suggests that the central tension in all of photography is one of self-identification—is it merely a mimetic program of using a machine to manufacture representative images, or is it a high art equivalent to painting?

The six named chapters form a general progression through philosophical considerations to an examination of the historical processes that have led photography to the station it occupied in then-current society and culture. The first chapter, or essay, "In Plato's Cave", considers the nature of images and their relation to reality; it presents a catalogue of cultural and social beliefs about photography as well as a catalogue about photography's typical uses throughout history. The second chapter, or essay, "America, Seen Through Photographs, Darkly", considers the social milieu obtained in the United States of America during the time of photography's initial penetration into commercial markets and artistic endeavors. The old-time school of euphoric humanism, as championed by Whitman, gave way to anti-humanism, realism, and Surrealism largely due to the camera's ability to produce images quickly and cheaply. The history of this change is documented with supporting evidence derived from the works of named photographers.

The third chapter, or essay, "Melancholy Objects", focuses on the Surrealist implementation of photography in the United States of America. The Surreal is only vaguely defined in the text, but numerous American photographers' work is considered and a relentless comparison of modern photography to Surrealist goals is presented. Additionally, the nature of reality and the interplay between images and reality is briefly considered. The fourth chapter or essay, "The Heroism of Vision", considers the effects of photographs upon perception. Like painting, yet essentially different, photography is now considered a high art, capable of illuminating the human experience. The methods used by photographers to create art are presented and considered.

The fifth chapter, or essay, "Photographic Evangels", briefly presents a history of photography's development, and then delves into the essential theme of the monograph—the very nature of photography. In a question that is not answered, Sontag explores the tension between two great photographic camps. On the one hand, many consider photography as nothing but a mechanical process whereby dependable representative images may be quickly and cheaply produced. On the other hand, many consider photography to be a high art, deserving of praise and inspection. The text presents evidence for both points of view and then concludes that the argument likely will persist as long as photography itself. The sixth chapter, or essay, "The Image-World", ends the monograph by presenting the fragile theory that images—of which most are photographs—are equivalent to reality. The text develops the theme without offering convincing support, and then briefly considers the early reaction of the literary arts to the advent of photography. The monograph concludes with an examination of the differences of opinions about photography between American and Chinese culture and politics.

More summaries and resources for teaching or studying On Photography.

On Photography from BookRags. (c)2022 BookRags, Inc. All rights reserved.