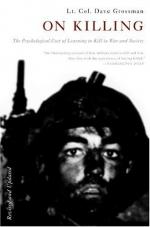 A fictive location popularized by Garrison Keillor. It is often true to life and strives to be quintessentially America. This is a famous town in America even though it does not exist in the factual world. Grossman refers to it in the introduction.

A highly reputable newspaper in America. The author refers to it during the introduction to show extreme anti-killing ideologies that are part of the confluence of influences in contemporary American society. This view will become important as Grossman shows how it can pose a danger to soldiers and recovering veterans of combat.

These were a weapon used in the American Civil War. They had bayonets attached at the end. Both of these weapons turned out to be most effective in enhancing the posturing techniques used by the foot soldiers as people on both sides were terrified by...

On Killing from BookRags. (c)2022 BookRags, Inc. All rights reserved.